Other than senior discounts and Medicare, one enormous perk of aging is the lack of hairy legs.
Oh, I do occasionally – about once every three or four months – have to harvest the meager crop, scattered sparsely on legs whose veins tend to make them look like maps of the London subway system.

Hair is a contrary mammalian trait. It seems to grow where we don’t want it and disappear from places where it is fervently desired.

This is true for both men and women but I will deal only with the aging female here. [And I will not deal with all of the capillary ramifications – like moustaches (which is another dilemma altogether).]

When I was younger and more smug (smugness seems to be characteristic of youth) I would smirk disparagingly at men who had attempted to disguise a balding pate by combing longer locks over barren skulls.

My once glorious tresses still exist but, like the earth’s aquifer, are diminished.

My hair is thinning.

From the front and the sides, I still look adequately ‘haired’. Not so much from the back.

Now I too must fluff the remains and try to guide them over my pink, pink scalp.

I even have some powder I can sprinkle over the too obvious hair barrenness. It helps.

So beware, oh youth. Avoid smugness and smirks. All too soon, that which you deride will be that with which you must contend.

I recently attended an event for writers focusing on our respective heritages. [This is a photograph of  some of my ancestors] 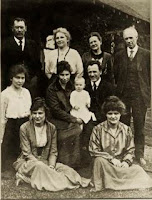 We were encouraged to write a little something. I wrote a synopsis of my life:


Like most U.S. citizens, I am a mongrel
Within my veins and chromosomes flows the heritage of 300,000 years
Or more
I, like all people, came out of Africa.
According to DNA analysis, my Paleolithic ancestors lived in northern Spain.
I do not remember this.
Family conversations alluded to more recent ancestors from the British Isles and Germany
I do not remember this
I do remember stories of early California ranches and farms –
Buckboards and stage coaches—
Not from personal experience
From stories.
Then I began to act in my own drama.
First, following the standard American script:
School, college, marriage, children
Cooking, cleaning, washing clothes.
Eventually, divorce
Jobs that took me to many lands
Learning, absorbing, respecting.
I am part of all that I have met and learned.
All that I have met and learned are part of me
And I have only just begun.
Posted by Mim Neal at 4:34 PM No comments:

On average, I delete about 90 emails a day.

The algorithm that runs the show seems incapable of guessing my gender. I have in the past week, received two with the subject line: Men’s Health News (first sentence begins-- If you have ED). I don’t.

↑   I realize that this can be critically important in some relationships. I am glad there are resources available.

But I want to know a couple of things. Is the problem so pervasive that random emails will reach thousands in need?

And why, if the problem is so pervasive, are there stories of sexual assault in nearly every edition of the paper?

And why is there the “Me Too” movement?

And why was there an article in today’s NY Times that more than 100,000 sexual assault cases have resulted in 1,000 arrests with more on the horizon? And “another 155,000 or more sex assault evidence kits still await testing.”

And why are there 48,000 immigrants being held in ICE for-profit detention centers? Yes. That’s a related story.

We need to start treating other human beings as if they are persons of value.

Because they are.
Posted by Mim Neal at 2:10 PM No comments: