This is what we are about

"Give me your tired, your poor, your huddled masses yearning to breathe free, the wretched refuse of your teeming shore. Send these, the homeless, tempest-tossed to me, I lift my lamp beside the golden door!"

Looking at these words etched in the soul of this nation, I see no mention of race, or religion, or gender. The golden door has slammed shut -- replaced by a wall of intolerance and a wall of arrogance.

This has been a week of inexcusable actions, a week that will live in infamy.

This is not what we are.

This must not be what we will become. 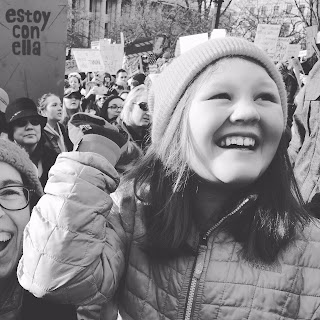 This is Iris Genevieve McClure, the face of the future.


She was as devastated as any of us.


Look at her face.
See in that face the joy of being with women
-- all women -- celebrating the power of women.

No matter what happens. No matter how many times we need to stand and march and protest and petition, we will do it. And as long as we do, there is hope -- for women, for children, for Muslims, for African Americans, for Hispanics, for LGBTQs, for any who are threatened.

Until, someday, all people --whatever their gender, or age, or race, or sexuality, or ability, or religion, or (yes) politics are celebrated.

I will never do it again but recently I was reading two books: “Homegoing” by Yaa Gyasi and “The Underground Railroad” by Colson Whitehead. I kept one upstairs and one downstairs, reading each when I had a bit of time. Both are powerful books about aspects of slavery in this country. Both are complex books with variable main characters and sometimes convoluted timelines.

I will never be able to pass any form of quiz about these novels, the names of the protagonists, or their chronology. [Unless I read them again. Which I might.]

However confused I got (and I did get very confused), I don’t believe this foolish practice was without substantial benefit.

Reading about any aspect of history should (in my opinion) help you better understand that history – at a deep, visceral level that transforms your vision of a time period and its impact on the present. My upstairs/downstairs reading did that exactly that. Never again will I underestimate the horrendous scars our ancestors inflicted on a people and their cultures. These books obliterated any romantic/’Gone With the Wind’ vision of this nation’s history.

It is good to understand this, to acknowledge it and, acknowledging this, to work in whatever way we can to ensure that we never, never do this again – to any peoples, whatever their race or religion or sexual orientation.

No one should be confined to the ‘downstairs’ of our country.
Posted by Mim Neal at 6:28 PM No comments: