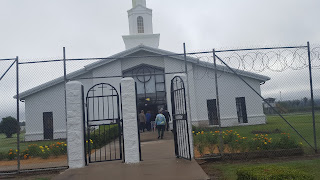 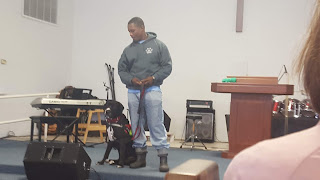 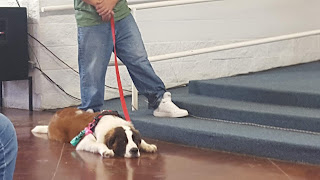 During any trip there are moments that are indelible. Something happens that is so special that you want to remember it forever.

Recently, I participated in a Road Scholar tour that included a visit to the Antioch Baptist Church outside Natchez, Mississippi. 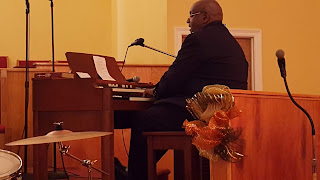 When we entered the modest sanctuary, I was a little disappointed because there were only about a dozen congregants standing in the choir loft. Then the music began. Beautiful, rich voices, singing in terrific harmony. 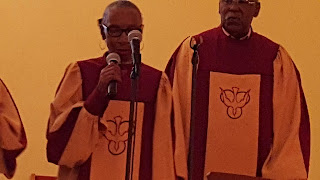 Then they invited us to join them. The songs were songs like “Amazing Grace” which everyone knew. I hesitated, unsure of my ability to climb into the loft, but went as soon as I saw there was a railing I could use. I made it up and joined the performance. It filled me with joy.

Before I climbed into the loft, I saw a woman from the tour who had proceeded me and who was singing with her whole soul. She and her husband were a couple I had ‘connected’ with – often sitting with them at meals. I think her husband was a judge and she was a Chicago matron (possibly Jewish). I used my smart phone to take a rather dim photo of a stunning moment – one that I will treasure for a long time. 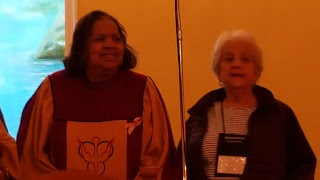 ‘Amazing Grace’ indeed.
Posted by Mim Neal at 11:21 AM No comments:

Pully Bone Natchez, Mississippi has a deep heritage. Named for the Indian nation that was defeated then expelled from the high bluffs along the river, it is said to be home to more millionaires than any other U.S. city.

The Natchez people were mound builders, reflecting a sophisticated spiritual tradition that did not survive repeated conflicts with the French (and Spanish). Many escaped into the Carolinas only to suffer the Trail of Tears. Later, cotton, harvested by slave labor, created the wealth that is still reflected in luxurious homes and plantations in the area.

I saw little of that. A medical problem prompted me to find transportation from the elegant paddle wheel boat docked at the river, to the local urgent care facility. I walked up the gangplank and into a red cab with white lettering identifying it as part of the Rock N’ Roll taxi company. It was driven by a slim older man who didn’t smile much. We ascended the bluff and drove to urgent care. The driver gave me his card (which I promptly lost) and left.

After an examination, I was told I could pick up a prescription at the Walgreen’s on the other side of a four-lane freeway. A cab was called for. The same one showed up. This time the driver pulled up to the drive-up window where we learned my prescription would be ready in about 15 minutes. So, we rode to the front of the store so I could get some necessities while waiting for the medication. With those in hand, I waited by the front door for the return of the Rock N’ Roll taxi. When it arrived, the driver, aware that I had missed the morning tour of Natchez’s mansions, drove me the long way back to the boat so I could at least get a glimpse of his city. 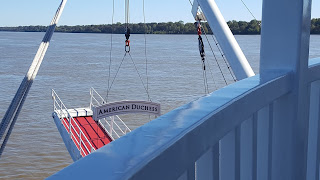 I wanted to pay him extra, but he refused. He only charges $10 no matter where he drives. This time, I kept his card, tucking it into my pocket as I walked down the gangplank and onto my boat. That card is now a treasured souvenir inscribed with his name “Pulley Bone”.

I have no idea if that’s his real name … or if he was just pulling my leg.
Posted by Mim Neal at 12:15 PM No comments: