I love the illusion of warm days in late fall when sunshine is translated into innumerable shades of gold and amber and crimson.

Ever so slowly the colors fade, even the green of suburban lawns.

Of course colors will remain but the residuals will become softer – gentle echoes of autumnal splendor, turning cooler, like the weather.

I know it is coming – the cold, slippery season.

It will have its own beauty, its own quality of the sacred.

Today I sit on my porch swing absorbing the waning warmth and colors, perfectly happy to pretend it will stay this way forever.
Posted by Mim Neal at 5:27 PM No comments:

500 years after this proverb made the rounds of Western Europe,
a new version emerged in northern Colorado.

I found one Brussels sprout in package of grapes.
What to do? Add it to my salad.
Placed in a pot and set to boil,
It was not done when I sat down to dinner.
I sat and ate, forgetting the pot on the stove.

There was a pungent smell.
Leaping up, I discovered a blackened pot
And one severely singed Brussels sprout,
Which I ate.
It was later, while scouring the blackened pot
That the fingernail was lost
All because of a sprout
Posted by Mim Neal at 4:00 PM 1 comment:

We always forget don’t we?

Oh sure, we say Fall is our favorite time of year but still we forget. 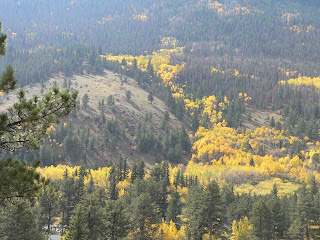 We forget the cascades of color falling down the mountainsides. 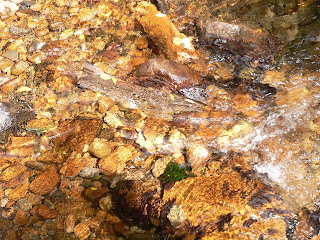 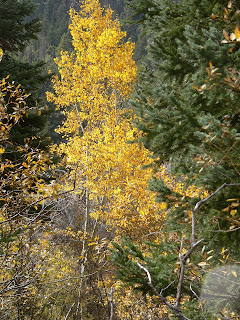 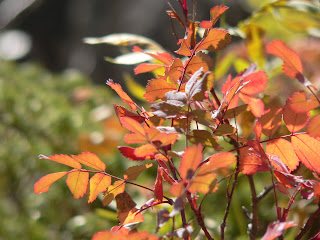 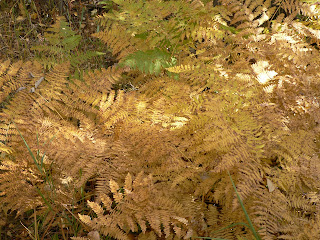 Hallelujah.
Posted by Mim Neal at 4:11 PM No comments:

They are almost as old as I am.

From the day I brought him home from our local Humane Society, Guinness has loved playing on my bed. At first, he attacked my toes. But claws are claws and I decided it would be safer if I substituted a cat toy. So he attacks the toy – scrunching down, attentive, then leaping on the plastic or feathered prey. Making the bed creates momentary mountains and valleys that add enticing mystery so that a successful pounce becomes more triumphant.  Making the bed under these circumstances can take twenty minutes, but who’s counting?

I brought Herbie home from the Humane Society a few days after Guinness. He had to undergo required surgery before being released. Because he’d picked up a slight infection, he had to be isolated for two days. At 4 p.m. on the third day, I opened the door to the bathroom in which he had been confined.

But the bed games have always been Guinness’s territory. Often Herbie watched, standing out in the hall, sometimes half hidden around a corner. Occasionally, he would come closer, standing solemn at the bedroom door.

Once in a great while, he would venture onto the bed, bat the toy then leave.

Now, after ten years of cohabitation, the games have changed. Now they both help me make the bed – taking turns playing mighty hunter.

After a trip into the American past (Feast of the Hunters Moon, Lafayette, IN) 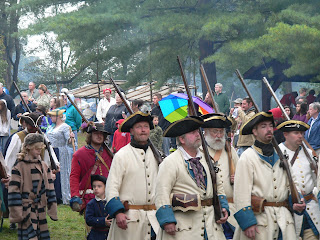 and my own past (friends in Indiana and the Chicago area), a visit with my younger son, a ride on the Chicago river, and an interlude in a butterfly haven, 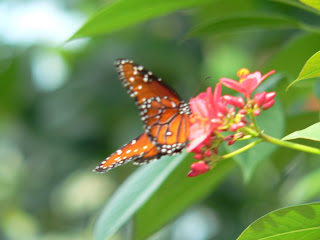 I came home to Loveland, Colorado in time to prepare for the inaugural readings and sales/signings for my first published book, Tree Lines, A Memoir.

I first realized that writing was what I wanted to do when I was about five or six years old (many, many, many decades ago).

Now I have a published book and, possibly, a future of more books and more readings and more sales/signings.

It's taking a bit of getting used to.

But it's awesome.
Posted by Mim Neal at 5:15 PM No comments: