Gift of a Grizzly

Thursday, May 28, I was one week into a trip with four friends I known for nearly 40 years. We had already seen countless splendors – rainforest in Vancouver, majestic mountains, waterfalls, eagles, elk, osprey, black bears.

That Thursday was the first day we crossed the apex (we would cross it several times as our bus route wound up and down mountain roads) a point from which water flows in three directions – to the Pacific, the Arctic and the Atlantic.

Just before lunch we had walked on the Columbia glacier – marveled at the pale blue water of its melting and were appalled by the fact that it (like other glaciers) was only a fraction of its earlier size … an ending supply of water for North America. 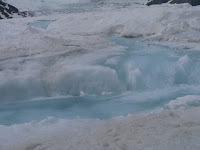 Moving on down the Icefield Parkway on a day that had already overwhelmed us with beauty, someone on our bus spotted the grizzly.

Mike, our driver-guide, pulled to the side of the road. Everyone watched in wonder as the awesome creature moved closer. Just out of hibernation, he kept his head down, feeding, while trotting toward the highway – so big, so graceful – golden in the afternoon sun. 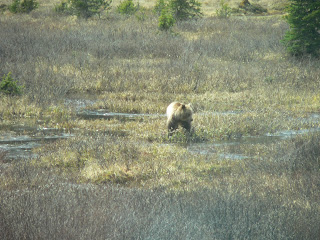 What a gift – to glimpse his magnificence. 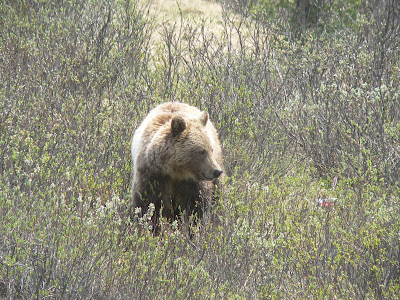 The waning hope of this planet is that, somehow, glaciers and grizzlies endure.
Posted by Mim Neal at 3:22 PM No comments:

As we pulled out of town toward Jasper National Park, Mike, our bus driver (who was expert at spotting wildlife) called our attention to the “Argentinean Flamingo” atop a telephone pole.


In unison, 49 of us leaned right and did indeed see a curvaceous pink form aloft.


None of us thought it was indigenous to Alberta, Canada.


49 pairs of eyes bored into the back of Mike’s head.


He explained. Osprey build their nests near water on a high perches -- the telephone pole was right by a little river.  Every year they come back, adding more material to the nest. It can get pretty messy. And that, in turn, can thoroughly screw up telephone calls.


Many experts, with all due environmental, ecological and biological consideration, sought solutions. Some proposed elaborate (and expensive) devices to discourage osprey from building nests atop telephone poles.


One line repairman had another idea. He went to Home Depot and bought a plastic pink flamingo for $10 Canadian. He placed it atop the telephone pole. Problem solved. No nest.


Elsewhere on our Canadian journey, we saw an osprey nest atop a pole specifically designed to hold an osprey nest. The chick resting inside seemed pleased. And the nearby telephone line was unscathed. 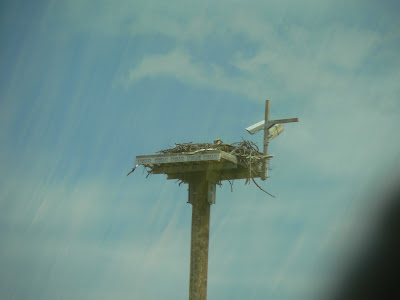 Would that all dilemmas could be solved so simply.