I just watched a Netflix movie: Zorba the Greek.

Because it is set in Crete and I recently returned from Crete, I rented it even though I’d seen it before. I remember thinking it was great. This attractive older Greek, irrepressible, connects with this attractive younger Englishman, repressed. And the Englishman learns to dance.

So. When I first saw the film, I too was repressed. It was a good object lesson.

What was Nikos Kazantzakis thinking? 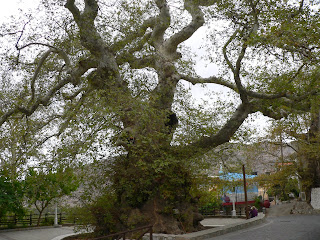 In Crete, I visited the plane tree in Krasi. This magnificent tree is probably 5,000 years old. Kazantzakis is supposed to have written Zorba the Greek sitting under its ancient branches.

But I don’t get it. Crete is the very ground of the feminine. Thousands and thousands of years of honoring the nurturing, creative forces of Earth and all that emanates from Earth. An entire culture that perceived the life force as feminine and good.

Today, even though they are absorbed like the rest of us into patriarchy, the people of Crete are warm and generous to each other and to strangers. They are not stupid and cruel as depicted in the film.

And yet, here, in this land of the feminine, Kazantzakis wrote a story of two men teaching each other how to be in this world …. without any regard for women. The women are used then die without being honored

A Myrtle Tree in Crete

On the second day of the "Goddess Pilgrimage in Crete" (www.goddessariadne.org) we stopped at the Paliani Convent. The complex is built around an ancient myrtle tree, thought to be at least 1,000 years old. 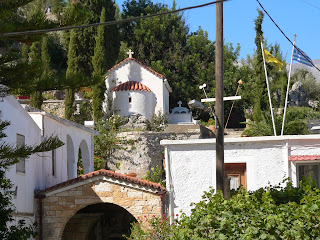 My back had gone out the day before so I was using a cane. One of the nuns, seeing me hobble along, called out and, through gestures, offered the loan of an aluminum walker. I declined with a smile and wave and made my way to the courtyard where the ancient tree stands, partly encircled by a stone bench. 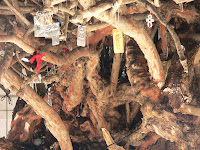 Today that tree is venerated as the Holy Myrtle, dwelling place of Panagia Mirtidotissa (Virgin Mary of Myrtle). For uncounted decades, people have hung symbols of their prayers from its branches.

Our group sat on the bench and each of us selected two pieces of ribbon. Then after a reading and songs, we each tied one piece of the ribbon on the tree, saying a prayer aloud. The other, we tied on a twig that we found in the area. As each woman tied her ribbon on the branches, we sang our wish that she, and all manner of things, would be well. 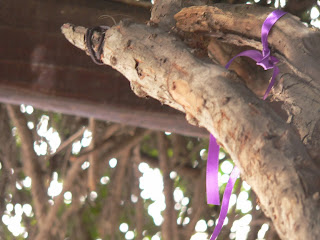 After our ceremony, many of us walked to the cell of the same nun who had offered me the walker. She sold little icons and black elastic bracelets adorned with colored beads. I selected one bracelet with a bead the same color as my prayer ribbon and wore it for a month before it began to wear out and I rested it on my home altar. The twig with its ribbon now rests downstairs next to an image of a Neolithic snake goddess (whose story I will tell another day). 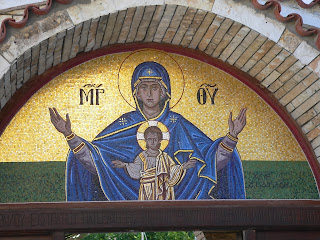 Each memento rekindles the gentle awe that permeated the convent . . . and me.
Posted by Mim Neal at 4:13 PM No comments:

The Lost Empire of Atlantis by Gavin Menzies was one of a half dozen books I read prior to visiting Crete. In it, Menzies makes a fascinating case for his theory that Crete was Atlantis and the Minoans (original residents of Crete) were global traders going as far as Lake Superior in North America in their quest for the components of the bronze that characterized their times.

I still don't know if I believe it (you can check out aspects of his theory on his website, www.gavinmenzies.net). True or not, the book expanded my attitude about ancient ancestors. I had already learned that the Minoans (circa 3500 BCE- 1450 BCE) built magnificent multi-storied 'palaces' and had toilets. Impressive. But traveling half way around the globe using stone circles as navigational tools? It seemed -- it still seems -- unlikely.

Before my friend and I joined the goddess pilgrimage (www.goddess ariadne.org) on Crete, we stayed a couple days in Chania (also spelled Hania or Xania) a city that was not on the official itinerary.

Since Neolithic times, Chania has been Minoan, Greek, Roman, Byzantine, Turkish, Venetian, and eventually Greek again, depending on who conquered it when. Its crown jewel is the magnificent harbor reinforced circa 1250 CE by the Venetians. 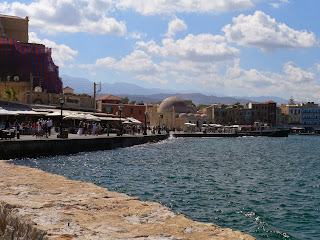 Chania was our first stop on Crete and we were enchanted. We wandered happily around the harbor and old town, taking pictures. On my own, I wandered into the Maritime Museum housed in the old Venetian shipyard. 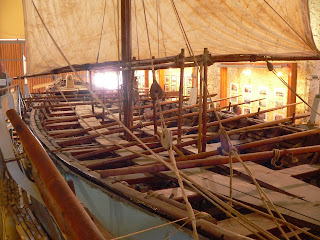 There, amazingly, was a full-sized recreation of a Minoan sailing vessel. I walked around its exterior, noting the plank benches for 24 oarsmen, the two long poles for steering and the captain's chair, protected by stretched hides. 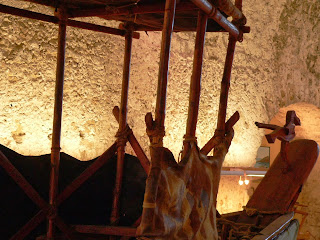 The reproduction, based on depictions on the walls of Minoan temples, was created for the 2004 Olympics and was actually rowed/sailed from Chania to Athens for the opening ceremonies. Its basic structure was cyprus planks covered with resin and canvas, then whitewashed. 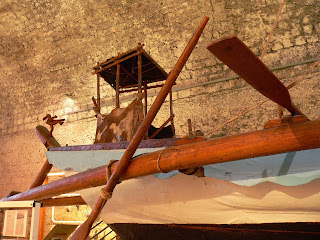 Circumnavigating the ship, I could imagine it circumnavigating the Mediterranean 3,500 years ago. Did a vessel like this actually cross the Atlantic? I cannot say. I can say it moved me across millenia into a deeper appreciation for the aesthetics and technology of a people whose history is recorded only in fragments of splendor.
Posted by Mim Neal at 2:38 PM 1 comment:

Why has it been so long since I've posted anything on my blog? Lots of reasons.

First, I was a long way away – more than six thousand miles away – in Crete.

Second, I have had a long illness – upper respiratory problems that have festered since mid-September. It's November!

Third, in Crete I was immersed in an ancient culture – the Minoan – that flourished on Crete from about 3,000 BCE to about 1,450 BCE when it was wiped out by a combination of a tsunami and invading Mycenaeans.

The Minoan culture was matrifocal: it honored women – mothers, maidens, and crones. It was peaceful: it had no kings, no armies, no weapons of combat. It was communal and egalitarian: no very rich or very poor. It was creative: the remnants of its art that have survived for nearly 3,500 years are stunningly beautiful. Frescoes and caves echo with the songs that serenaded goddesses that represented the earth, the sea, the sky, birth, trees, the harvest – all the manifestations of life (and death as a component of the cycle).

Perhaps, like most of us, I had thought such a culture was some utopian fantasy – something that could not possibly exist. But it did exist – for almost two thousand years.

The goddess pilgrimage in Crete (www.goddessariadne.org) was led by spiritual scholar and author Dr. Carol Christ and her assistant, Mika Scott. There were 14 of us on the tour to sites that had been sacred to the Minoans (or in some way revealed a feminine focus). We were from far-flung places: 3 Australians, 3 Canadians, 1 Alaskan, 3 from the Midwest, 1 from Massachusetts, 2 from Colorado, and 1 ex-pat from England who had lived on Crete for six years.

For two weeks we visited sites in caves, in archeological ruins, at mountain springs, in Byzantine churches, or convents, or cliff-tops. At each site, we performed a ritual or in some way acknowledged its significance to our ancestors and to ourselves.

We began to believe that a peaceful, creative, egalitarian culture once existed and, possibly, could exist again.

So I guess I have been stunned to silence. Letting the truth of this sift down into my being. I still have respiratory problems. But I'm home. And I think, finally, I am ready to tell some of the stories of some of what I learned. Stay tuned. ,
Posted by Mim Neal at 10:50 AM No comments: