I have lived with two cats since November 2002. When I first adopted them from the Larimer County Humane Society, they were personable but quiet. They purred when caressed and occasionally meowed (Guinness the brunet more than Herbie the blond).

Just as cats are supposed to do.

No one else lives with us, so I talked to them. I let them know when I was about to fix a meal (they really picked up on that one) when I was going to go upstairs (to work at the computer) when I was going to make the bed (Guinness especially likes to help [play] with that) when I’m going to read or lie down (Herbie loves to come cuddle) and when they had done something wrong (like eat flowers or knock over glassware – actually that was more like yelling). And so forth.

As time went on, they began to respond. Even Herbie (although he ‘talks’ so rarely that it still makes me jump). Increasingly.

Now in the morning, when I look into the study to tell Guinness I’m going to make breakfast, he responds. It doesn’t feel as though expletives are involved. Nothing like ‘Well it’s about time!’ It’s more like ‘Good morning, I’m looking forward to it.’ Very civilized.

I always feed them before I fix my meals. I’m not stupid.

When I’m fixing my dinner, Guinness often will bring a toy into the kitchen and meow. I’m supposed to throw it. I do. He brings it back. I throw it again. If he brings it back and I don’t see it, he meows again (‘please pay attention, lady’).

So far so good. Or at least acceptable.

But it seems to be getting worse. Now sometimes Guinness will be in an entirely different part of the house – meowing. I have no idea what that’s about. I don’t know if he’s crying, complaining or just philosophizing. It’s actually sort of annoying.

But it’s my fault. If I hadn’t started talking to them, they would most probably not have become so vocal.

For the most part it’s harmless – a gentle experiment in inter-species communication.

You can certainly try this at home. But be warned. The more you talk, the more they will ‘talk’ and it may be a slow decline into cacophony. 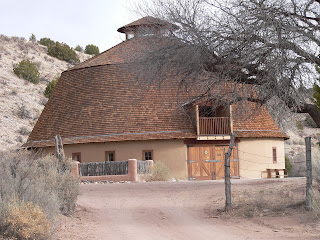 There’s a labyrinth on the grounds of Ojo Caliente Resort in New Mexico.

I returned from Ojo Wednesday night. My two companions were going for a simple, fun spring break. That was something I wanted as well but I also knew that I must heal some emotional wounds. I enjoyed and savored soaking in the springs and eating the wonderful food and the massages. But neither the waters nor the entrees nor the rubbing seemed to touch the wounds.

One morning, taking a walk with no purpose other than to walk, I wound up at the entrance of the labyrinth across the road from Ojo’s historic circular barn. 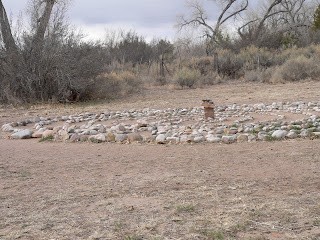 I’ve walked labyrinths before. They are powerful meditative tools. The circular path is clear; you cannot get lost. You walk deep into the center, pause, then circle back out.

I entered. With every step, I focused on the word/verb/prayer ‘heal’. At first, only that single word. Later, names coupled with the verb. I named my sons, my brother, his wife, my friends, my parents, other ancestors. I took them all with me to the center, then circled back out.

The next day was cold but, again, I was drawn to the labyrinth. And again my steps focused on the people I loved. Early morning moisture caused the sandy surface to record the pattern of my soles. I saw my footprints move toward the center, then overlap as I moved out, occasionally creating odd sort of butterfly patterns.

In the spa, there was a sauna that my friend compared to a sweat lodge. And it drew me. As I sat amid the steam, I again silently named the people I loved, wishing them/ praying them healing and well-being.

And I was lighter.

And I was reminded of the power of names, of thoughts, of prayer. 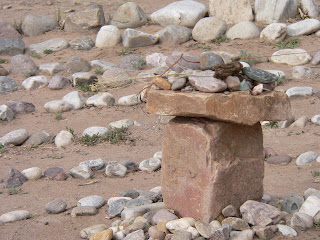 And I was grateful.
Posted by Mim Neal at 9:28 PM No comments:

Think about it. The ground softens. Incipient leaves soften trees’ profiles and the horizon is muted by hints of green.

In response, as I wander the aisles at the drugstore, I am tempted by plush toys: soft bunnies in various pastel shades and of course baby chicks – pale yellow and fuzzy.

Everything comes in softer hues: coats and clothes and facial expressions.

Evidently it is hard not to celebrate Spring. I’m not going fight it. Today – the 2011 Vernal Equinox -- I am escaping all my responsibilities including my cats and taking three and a half days off to have fun (and thaw out my moods and spirit).

Please, go and do likewise.
Posted by Mim Neal at 4:31 PM No comments:

I’ve never enjoyed being in the midst of crowds. Sometimes sitting in a baseball stadium full of people rooting for my team is okay. Otherwise, I prefer being where one or two or, at most, a few hundred are gathered.

The January 2011 National Geographic reports that this is the year the earth’s population reaches 7 billion.

Fully modern humans—the ancestors of every person alive today—evolved in Africa about 200,000 years ago. We left Africa in shifts and by 60,000 years ago, H. sapiens had dispersed to nearly all corners of the planet. By 10,500 years ago, people had domesticated other animals and developed agriculture. Reliable food sources supported enormous human colonies, providing some individuals with the time to dream, imagine, and build civilizations.

And have more kids.

And now there are 7 billion of us.

What have we done so far – in addition to creating reality shows and Ipods?

We’ve reduced the variety of grains we eat. Now its mostly wheat, rice and corn.

We caused (directly or indirectly) the mass extinction of species.

We need to acknowledge what we have done and work to ameliorate our impact. We need to reduce our consumption of resources and defend those that remain.

And above all, we need to work together, as a species.

We are, after all, rooting for the same team.
Posted by Mim Neal at 9:53 PM No comments:

They are, I believe, in every room in my house.

The painting in my study, the print in my bedroom, the porcelain sponge holder in the kitchen, the green glass decanter on the windowsill in the dining room.

A single plaster hand lies at the center of my altar. Jane gave it to me to remind me that it took both of us to do the work that was needed at the 1999 Parliament of World Religions in Cape Town.

I have a cloisonné necklace with a brilliant butterfly on a black background. Every time I wear it, I think of Betty – the friend who gave it to me.

And a rainbow scarf that inevitably generates compliments --compliments that really belong to Melinda who gave it me – along with her teachings that helped connect me to Spirit.

And funny socks – from Beverly and Jenn --that dependably elicit approving smiles.

Even cat toys given to me by those who know how much I love my cats.

A set of cobalt blue glasses from Rosemary.

The photographs and a nightlight from Shelly.

And so many of my books.

I believe I could go from room to room acknowledging, not just the things but also, more importantly, the people they represent and the wisdom that each of them has shared with me.

I live within the embrace of my friends.

Perhaps we all do.
Posted by Mim Neal at 3:00 PM No comments:

[I’m back – with apologies for the hiatus. I promise to blog on more frequently.]

They (the anonymous exploiters of American consumers) make sparkly balls – about the size of ping-pong balls -- that are, without question, the plaything most favored by Guinness (one of my two cats).

Last Saturday, while at the pet store getting both food and litter, I bought a package of four sparkly balls – one red, one silver, one blue, and one purple.

My intent was to ration them, delight him with the purple and hide the rest.

Both cats were at the door to welcome me home but I thought I managed to sneak the toys in, unobserved. When everything was put away, and when I was sure the both cats were off in another part of the house, I opened the cellophane package, extracted the purple specimen and quickly slipped the package into a kitchen drawer.

When Guinness wandered into the kitchen (dinnertime was approaching), I showed him the purple sparkly ball, threw it into the living room and laughed as he scooted after it, sliding slightly on the wood floor. He brought it back, I threw it again, he chased it again and we played this quasi-fetch game for a good five minutes before he remembered it was dinnertime.

What was going on?

I opened my (not so) clever hiding place. There in the corner was the cellophane bag – empty. And there at my feet was Guinness. I swear he was grinning.
Posted by Mim Neal at 6:56 PM No comments:

This is both an explanation and riddle.

Guess what this is Prologue to:

It was winter so no one heard her screams.

She screamed at jars that wouldn’t open.

Fathoms deep in her psyche, unidentified pain tore out from her throat.

Avoided too long, it had metacicized.

Numb, she wandered her house – every room distinct, pleasing, filled with aspects of her life, her character, her taste. Travel souvenirs, photographs, paintings.

In the guest room: family photographs, her grandmother’s desk, a braid of buttons.