For my birthday I received numerous charming email greetings, a small passel of cards and a splendid family celebration during which I was presented with a memorable, amusing and much needed gift (an alarm clock in the shape of a semi cab). 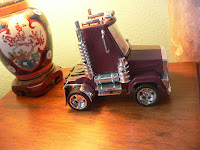 I also received dozens of birthday coupons – some by email, some by post. One of the coupons was from a favorite women’s apparel vendor… for $20 off. I wanted something lovely to wear to bed when I am an overnight guest with friends or family. So using the coupon, I ordered a long, periwinkle nightgown with an empire waist.

About ten days later, it arrived in the afternoon mail. The gown was gorgeous, with beautiful embroidery in many places. I tried it on. The length was good, even in the sleeves. The neckline was fine.

But it wasn’t going to work.

I hung it in the closet. It haunted me. I had so wanted it to work. But it didn’t. I knew I had to send it back but I didn’t want to.

The bottom of the empire waist hit my bosom right at the nipples.

I didn’t want to admit that the lovely empire bodice was too high for my anatomy. But it was. Finally, I called the vendor and arranged to return the beautiful gown.

I finally had to admit that I am a fallen woman.
Posted by Mim Neal at 12:02 PM No comments:

After nearly a month working at the 1999 Parliament of the World’s Religions in Cape Town, South Africa, I (at the behest of my employers) took two short tours – one to Etosha Park in Nambia and the other to Victoria Falls. Most of the group was flying home after Etosha but I had seen a photograph of Victoria Falls and was determined to see them in person before I left Africa.

I was the only passenger on the plane from Windhoek to Zimbabwe. In the U.S., the flight would have been cancelled. Instead, I was pampered by the all male crew until I suggested they just sit down and enjoy the views from the windows.

The countryside en route from the airport was more tropical than Cape Town or Namibia. The air, wetter. I was keenly aware that I had no anti-malaria medicine. Andy, the shuttle van's driver, let me sit up front and ask my thousand questions. At some point, still several miles from the town of Victoria Falls, I saw a cloud-like formation wisping over the palm trees. "What's that?" "The mist from the Falls. When they're in full water, you can see the mist from 10 miles away. This is a dry time." "Ten miles!" It was more than I could imagine. "Do you still see them?" Andy looked puzzled. "Do the Falls still amaze you? I live next to a huge lake that looks different every day and at different times of the day. But sometimes I don't even notice." He understood. "No. They're just there. Like the buildings and the road. They bring in a lot of tourists. They give me a job."

I didn't visit the Falls (they will always be capitalized by anyone who has seen them) until the next morning when I joined a group led by Sam. The Falls are in a national park, protected from fast food vendors and sellers of kitsch. No Disney animals, no neon, no soundtrack. The closest intrusion of merchandising was the swarm of locals selling bottled water in the parking lot. We were issued plastic raincoats (to be returned at the end of the tour). A faint wet roar could be heard even above the clamor. We crossed the road to the park entrance, looked at the maps, heard the history, read the plaques and saw the statue of Livingston. All the time the roar got louder and louder. The marrow in my bones began to vibrate in sync. The path began to get slippery. Finally, as we rounded a clump of trees, we saw the first section of the Falls -- awesome quicksilver thundering over black crags, framed by tropical foliage.

We were across the gorge from which they plummeted, safe on a natural vantage point. Every turn in the path revealed another cascade, each stunning. And amid the thunder and mist and crystalline sparkles were rainbows. Almost every strand in this giant moving tapestry generated rainbows. Sometimes at the summit, sometimes midway, or at the base. Narrow or broad. Faint or distinct. They danced on the falling water. There were hundreds of them. How could that be? Rainbows always pierce me with awe. And they were everywhere I looked. I used the raincoat to protect my camera, which I practically wore out.

Sam was very patient with me, always returning to guide me back to the group that had gone ahead. Never making me hurry. There was so much beauty I almost cried. I think he liked that. It took us two hours to walk the Zimbabwe portion of the falls. There is a smaller section in Zambia but the vantage gorge was in Zimbabwe.   We stood on the gorge, watching the jumpers and marveling at the great rocks of the east point of the Falls. Finally, soaking wet, we were persuaded to turn back toward the park entrance.

Walking beside Sam, I asked if he ever got tired of the Falls. His answer was immediate and decisive. "No m'am! I bring my family here for picnics on my days off." Hallelujah!
Posted by Mim Neal at 7:04 PM No comments:

When my memoir was published, the editor left out a couple of chapters. “African Interlude” chronicled the trip I took after working at the 1999 Parliament of the World’s Religions in Cape Town, South Africa.

I liked that chapter but who is going to argue with the very first publisher of your very first book? So. I’m going publish excerpts from the chapter on this blog. In this one, I’ll share what happened in Namibia. In the next, what happened in Zimbabwe.

There were eight of us and Ingo, our driver guide. Each of the eight had been to the Parliament, several leading workshops, but the conversation focused mostly on what we were seeing … and the van – a handsome, comfortable Mercedes that we had to push before the motor turned over to speed us toward Namibia’s interior.

This was December -- the rains had returned and the animals had dispersed across the vast Etosha pan, no longer gathering at waterholes for survival. To make sure we would see animals, we were to stop first at a game preserve. We drove north on a straight, flat highway past open range full of scrub and dotted with occasional water tanks. There were mountains to our left that we never seemed to get closer to. Weaverbirds nested on the branches of telephone poles that Ingo said were still booby-trapped with mines from Namibia’s long struggle for independence.

… Macadam turned to dirt at the entrance to Mt. Etjo, an elegant game preserve that turned out to be historic. This was where an armistice was negotiated in the 80s, a prerequisite to Namibia’s independence in 1990.

All we had to negotiate was the river that had formed since Ingo had driven the road two weeks before. We made it about half way across and stayed there, stuck, for four hours.

Men and women tested their strategies and strength and knowledge of mechanical physics to no avail. Twilight and storm clouds began to gather, making it less amusing to be some twenty miles from shelter in territory ruled by major mammals.

The roar of an engine and a cloud of dust heralded a petite blonde driving an open red Toyota four-wheeler with her two towheaded sons and a dog. Seeing our dilemma, she charged through the river, hauled out a rope and, when it had been secured to both vehicles, pulled us out of the muck.

We never figured out who she was or where she came from.
Posted by Mim Neal at 4:58 PM No comments: