Most days, I automatically put the sports section on the recycling pile, unread. But I only take the Monday – Friday editions of the New York Times, so I scan the Saturday and Sunday online versions and today inadvertently read a sports article.
Today, at the back of the sports section – just before I deleted the document -- there was a story about a Ugandan Little League team that had qualified for the Little League World Series (to be played Aug. 18-28 in South Williamsport, PA.).
For the second year in a row.
And for a second year in a row, the United States State Department denied the teams’ visas to travel in this county – because their documentation “contained discrepancies.”
We forget -- and obviously State Department officials forget – that not everyone has a birth certificate. That there are parts of the world where the paperwork that we take for granted – the paperwork that enables us to vote, drive, drink alcohol and travel to other countries – simply does not exist. Or if it does exist, does so only erratically.
Because of this, the Rev. John Foundation Little League team, which was to play its first Little League World Series game against Canada on Aug. 19, will stay home. The boys qualified by winning the Middle East-Africa regional tournament last month against Saudi Arabia.
They qualified by working hard, following a dream. Most live in poverty. Their parents, if they have them, “are often illiterate, making it difficult to verify birth certificate data.”
Little League baseball was introduced to Uganda eight years ago by Richard Stanley of Staten Island. Stanley pointed out that Ugandan kids may not even know their own birthdays. “They don’t have cake and ice cream parties in Kampala.”
Posted by Mim Neal at 3:43 PM No comments:

Years and years ago I first read the poem, Ulysses, by Alfred Lord Tennyson. One line lodged forever in my brain/psyche/soul:


There are more lines of course. The poem is a dramatic monologue and pretty macho. The narrator does not want to sit around and rule his little kingdom; he wants to set off with his buddies on perpetual adventures until he is enfolded in the ‘eternal silence.’


I can identify with the last stanza:


“Though much is taken, much abides; and though
We are not now that strength which in the old days
Moved earth and heaven; that which we are, we are,
One equal-temper of heroic hearts,
Made weak by time and fate, but strong in will
To strive, to seek, to find, and not to yield.”


Oh yes, ‘that which I am, I am’ – not as young, not as strong – but still striving, still searching, still trying to contribute whatever I am to whomever or whatever might need me.


But, for me, that one line needs expanding. Yes, “I am part of all that I have met” but, more accurately, all that I have met is part of me – all the people, all the places -- the entire rainbow of human cultures and the abundant and infinitely variegated planet. The beauty that pervades existence.


I am grateful to Tennyson. Poets plant thoughts that grow into our souls and, lo! become a part of us.
Posted by Mim Neal at 11:26 AM No comments: 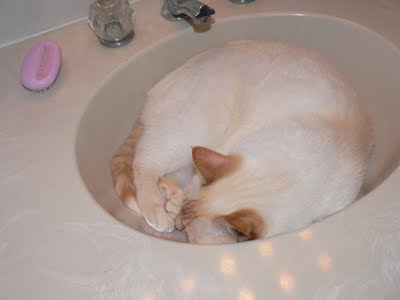 When it's hot, everyone must find a way to cope --
as Herbie has.
Posted by Mim Neal at 8:57 PM No comments: 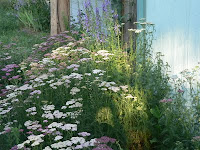 My garage is on an alley.


When I moved into my home I was impressed by the fact that other garages on the alley were fringed with flowers -- iris, sunflowers, hollyhocks.


As I worked to establish my gardens, I planted 'leftovers' by my garage door.


This summer, they have come into their own. Splendid, however unintentional. 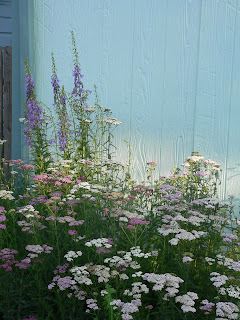 Some Shade for a Summer Day

It's hot here -- and probably hot wherever you are. So here's some shade and cool waters -- from Muir Woods again. 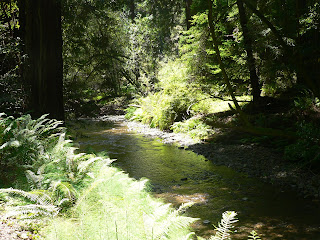 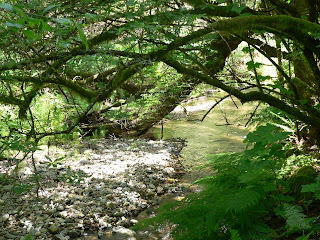 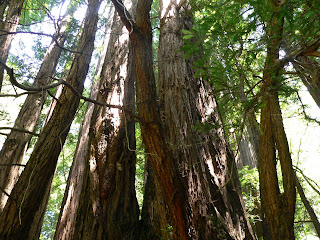 Muir Woods is home to Old Growth Redwoods -- many trees
(the tallest in the world)
one thousand years old.
A place to wander and wonder
and ponder the beauty of things
left alone. 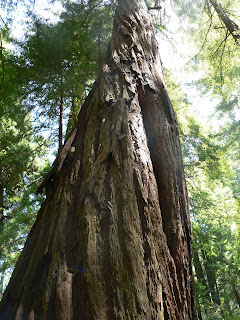 --- Perhaps you knew that. Mine tend to prove their perversity daily.

Take Herbie, for example. On days when temperatures approach or exceed 90, he will often curl up inside the upstairs bathroom sink. Presumably because it is cool.

Today is about 90. Earlier this afternoon, he was there, surprising me as I prepared to wash my hands.

I did mention that the temperature is about 90?

There is no explanation for cat behavior – except perversity. Bless them both [and my black, furry slacks.]
Posted by Mim Neal at 4:05 PM 1 comment: 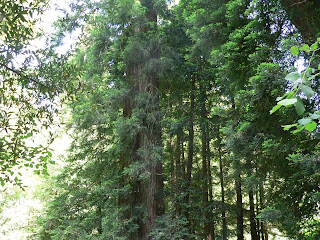 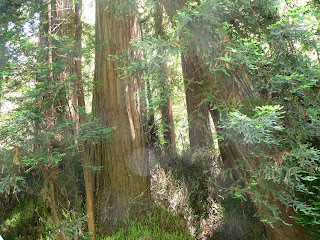