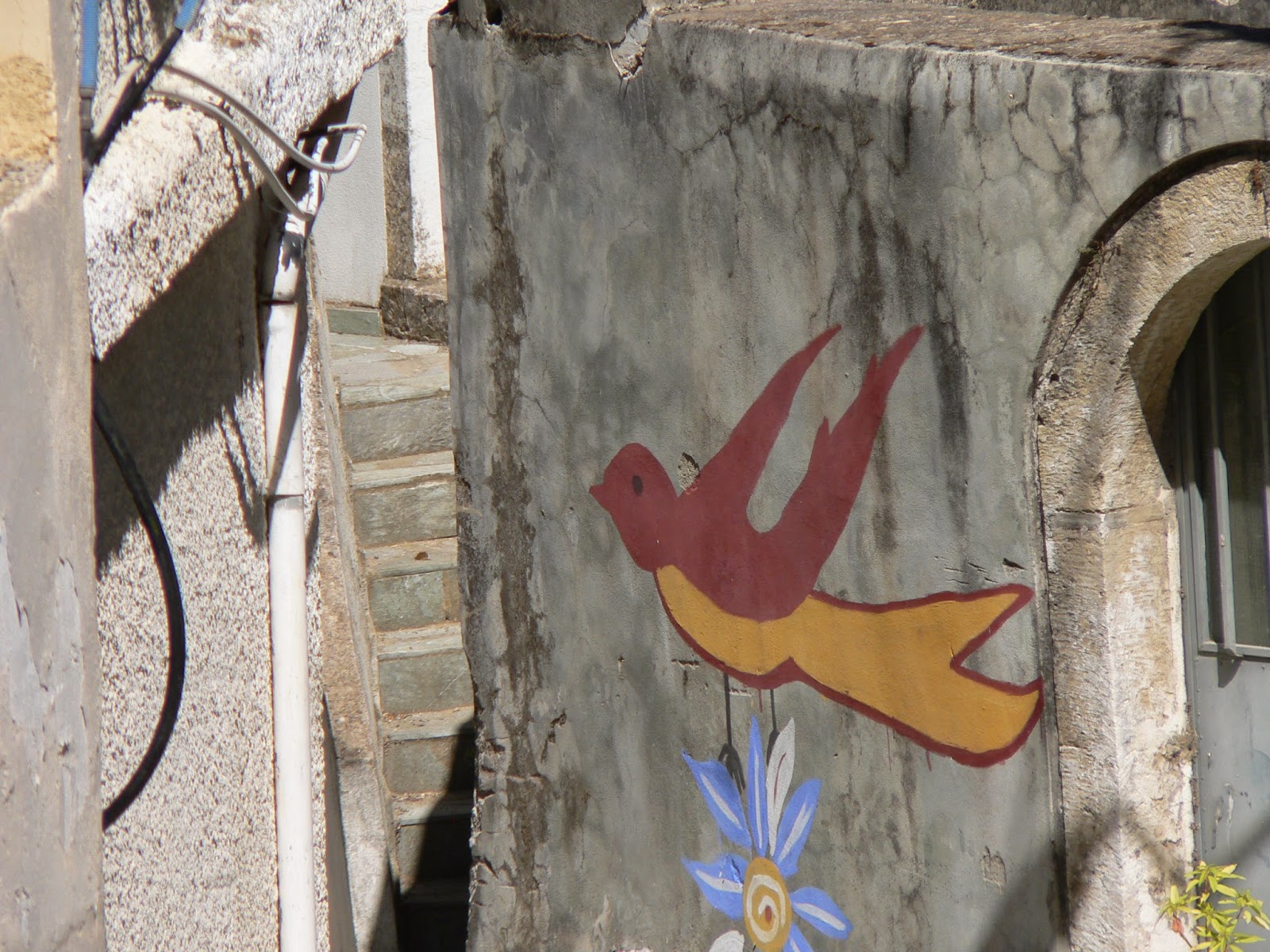 One morning during the Goddess Pilgrimage to Crete which I took last fall, our bus driver, Babi, offered to take us to his village. We walked down into its charm and after exploring its streets and church, found the local coffee shop. 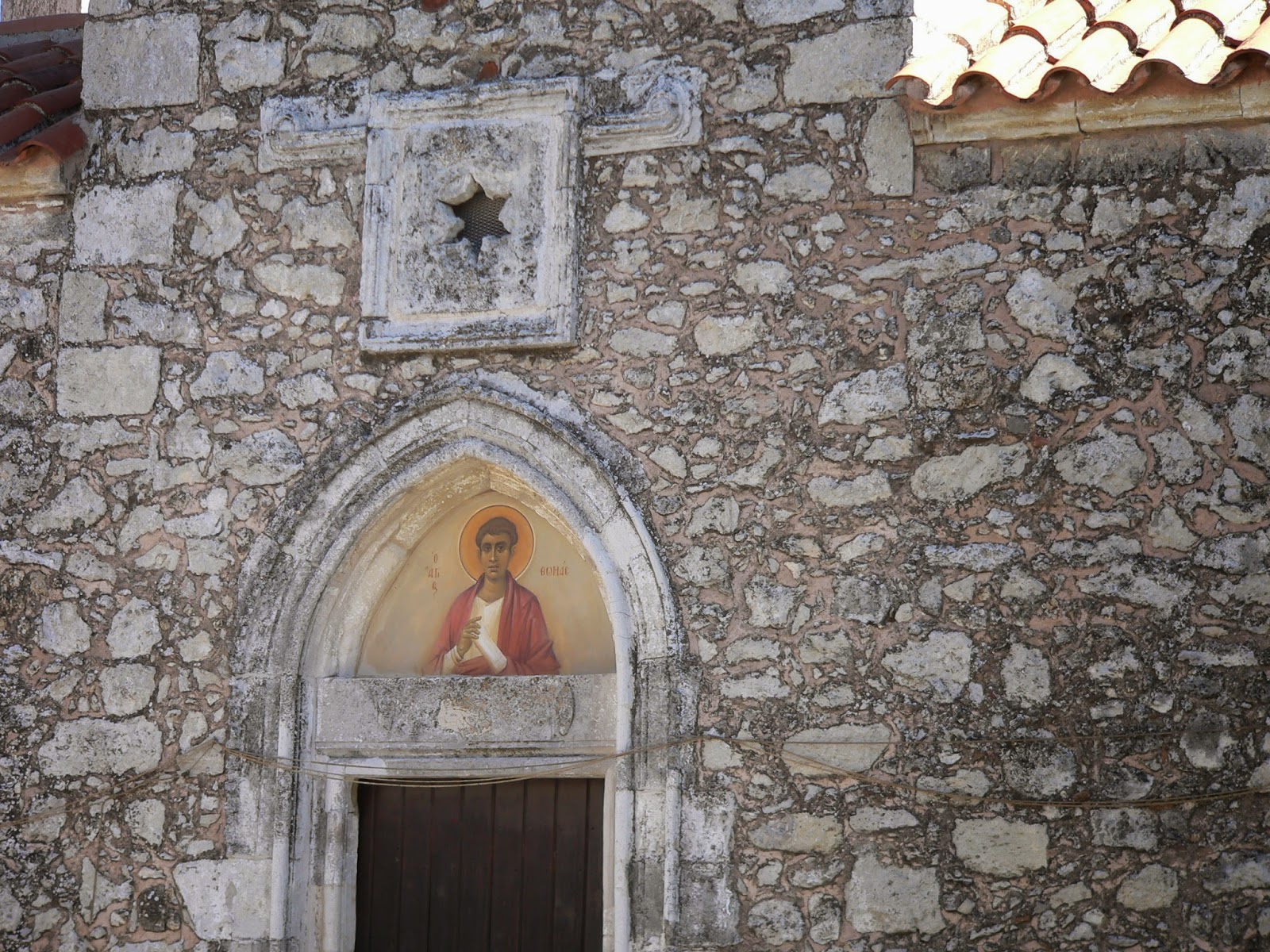 With the generosity that is typical of the people of Crete, the owner of the shop bought all us of coffee which we enjoyed in the dappled sunlight of the shop's courtyard. 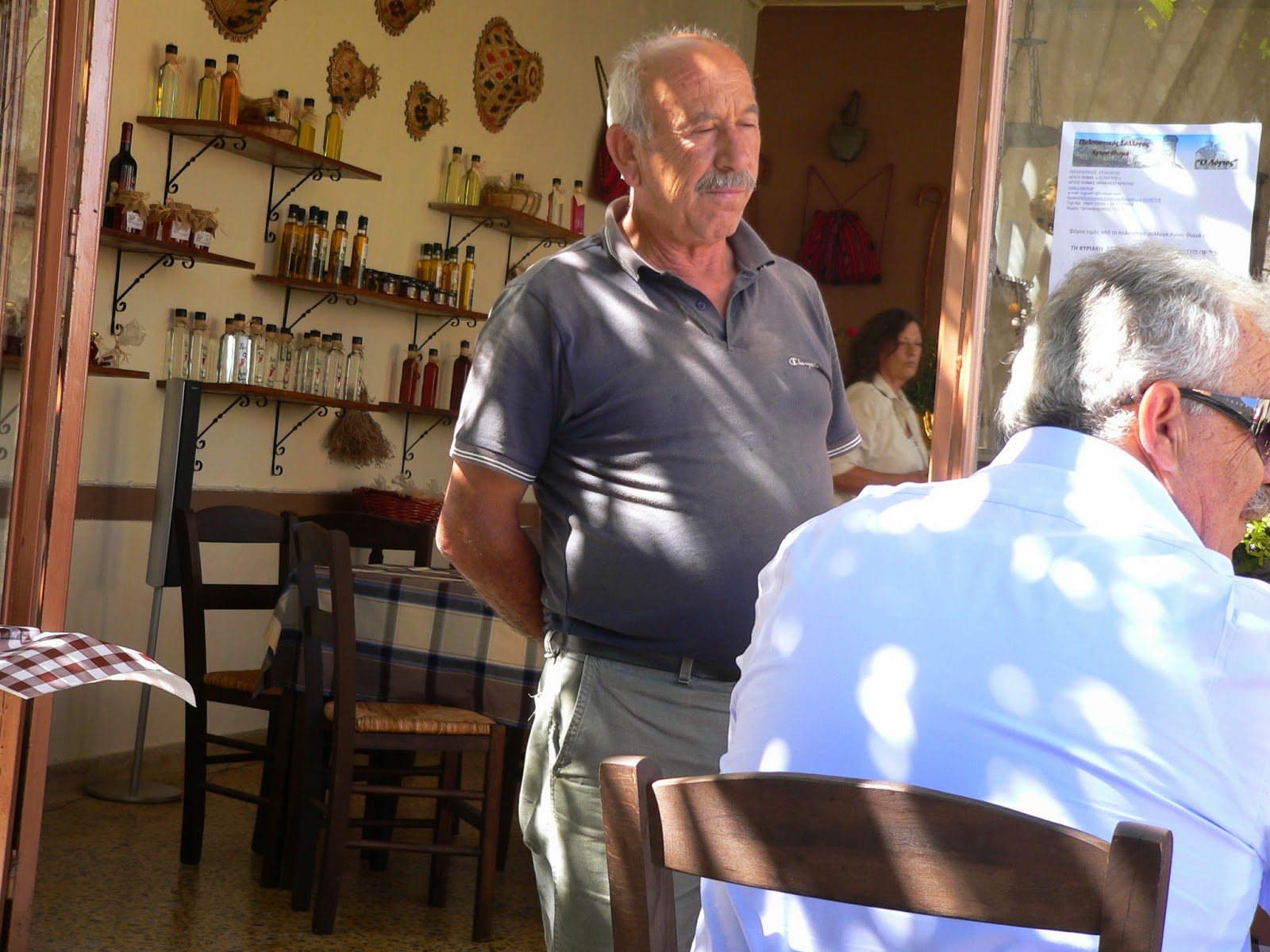 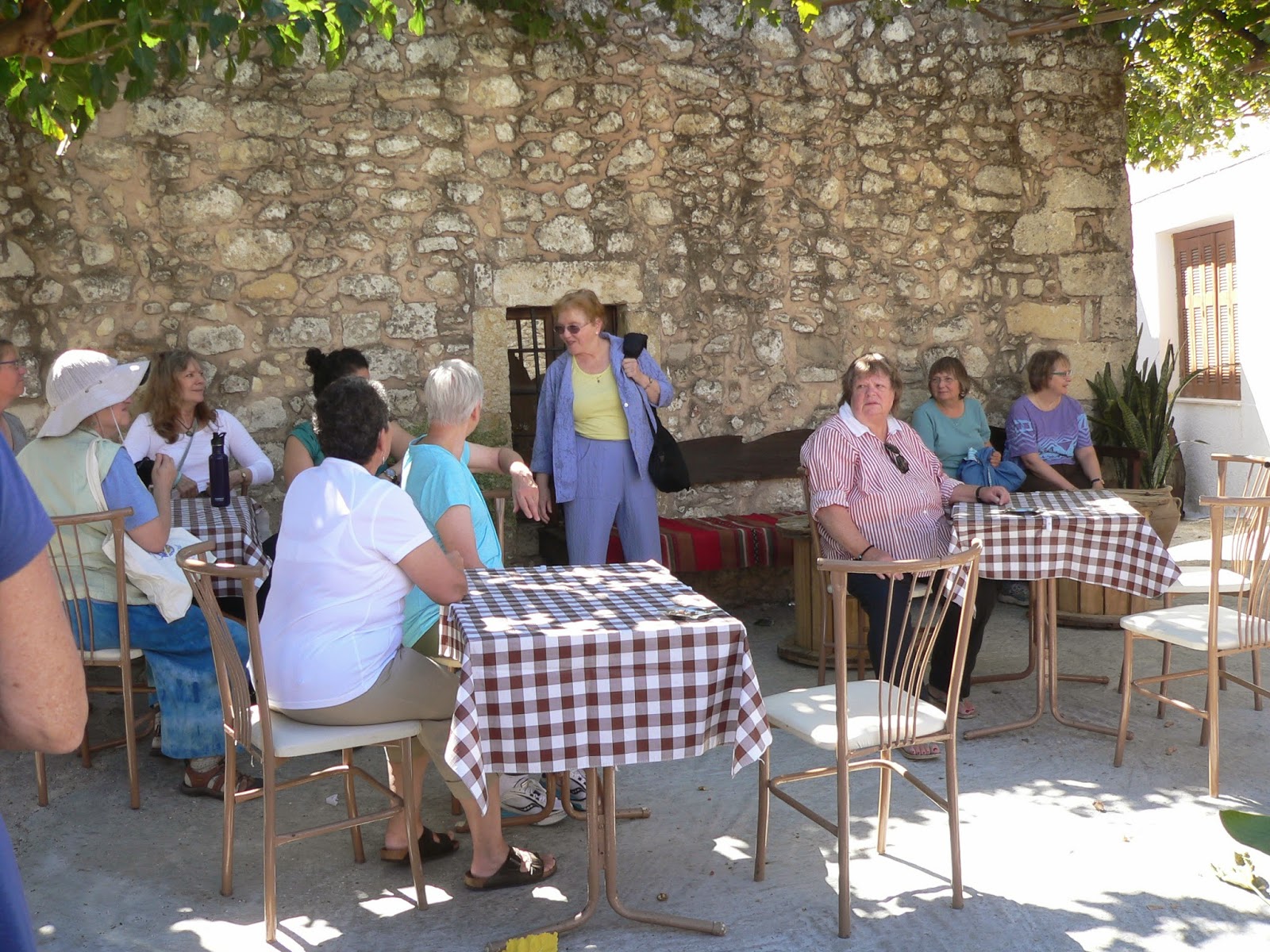 A small portion of a lovely day, of a lovely tour of a land permeated with the feminine.
A treasured memory.
Posted by Mim Neal at 12:07 PM No comments: 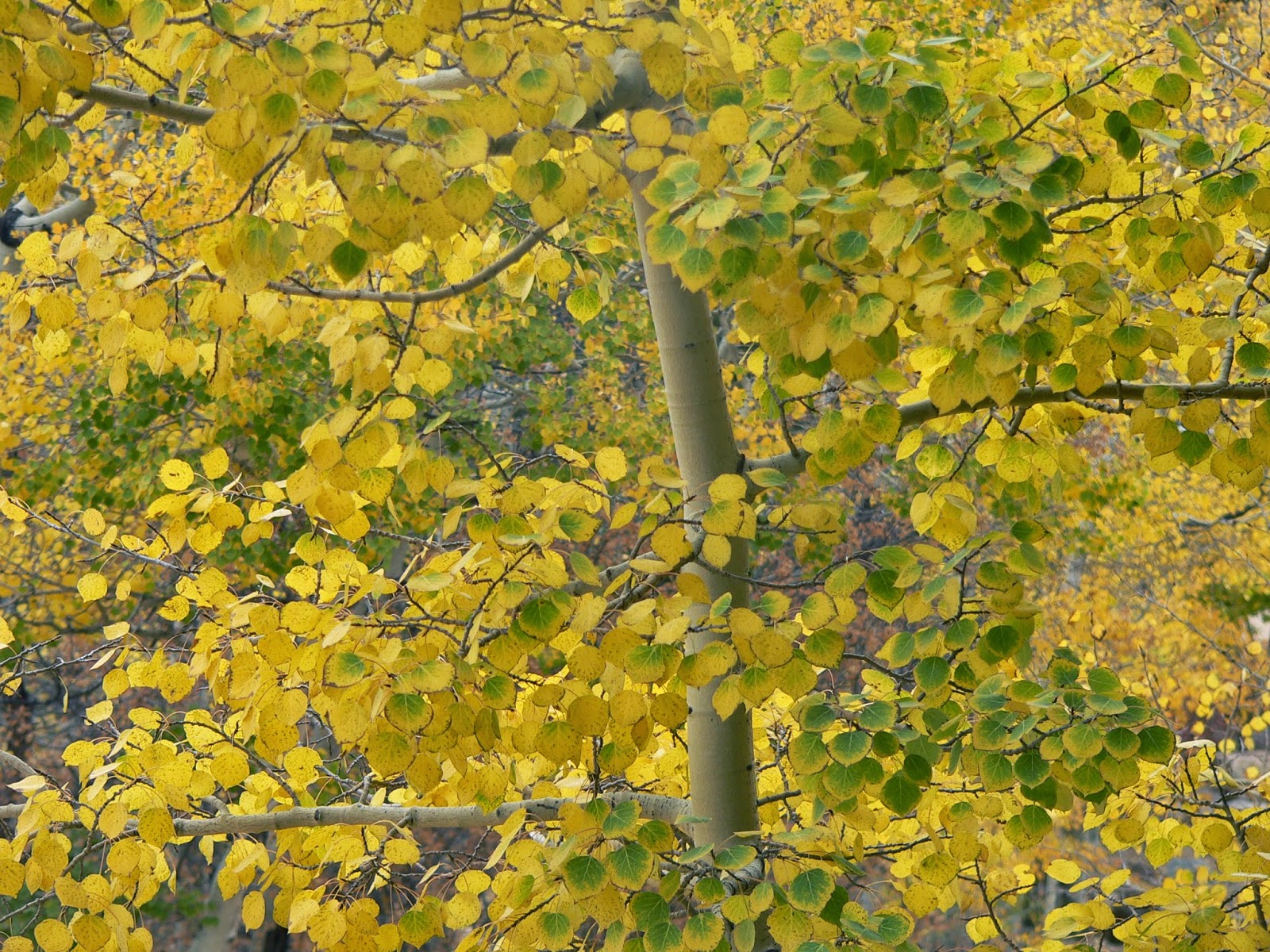 One day last week I spent some time harvesting the gold falling from the huge maple in front of my house. I cleared a path. The tree was still brimming.

The sun was shining; the temperature temperate. I was immersed in beauty. However messy, it was beauty nonetheless.

Later the same day I learned of horrific physical problems assaulting two dear friends. One, who, with her husband, has always been there when I needed help of any kind, was in excruciating pain and facing surgery, perhaps death. Another, whose gentleness had permeated my days, was in excruciating pain and facing possible paralysis. I was stunned – I sleepwalked through the evening – doing the things I routinely do -- feeding the cats, fixing dinner, eating, reading, watching the end of a Netflix movie – sort of present, sort of not.

I know it’s all part of the cycle of life – leaves falling, people dying. I know Thich Naht Hanh (and other Buddhists) affirm that there is no death, no birth – that everything is part of some great continuum. I even have days when I believe that/understand that.

It is so hard to see people you care about suffer. And you worry about the one friend's husband and the other friends new kitten. Who will take care of them?

By the next morning, the stunned-ness had melted into a gentle sorrow, floating on the edges of my day and I focused – as much as I could – on my routines – feeding the cats, fixing breakfast.

I was sitting at the table looking out my back window when a large bird flew at the birdfeeder hanging outside. My birdfeeder is designed to provide for small birds and to prevent squirrels from stealing the food. When a small bird perches on the ledge, it can access the seeds. When a squirrel tries it, its weight shuts the feeder.

The bird – a flicker – was almost as large as the feeder. It flew at the transparent portion of the feeder, banging at the inaccessible seeds. And flew away. A few moments later, it came back .. .and balancing below the feeder’s ledge it triggered the seed dispensing . . . and ate.

I had several moments to see the intricate patterns on its long slender body – the touch of crimson on its chest – the dark roundness of its eyes – before it flew away.

And I was back. I became aware that my egg, scrambled with mushrooms and a little cheese, was delicious. That the sun was magnifying the gold of my backyard tree. And the sky was perfectly blue and beautiful.

Before I went to Nova Scotia, I read Longfellow's Evangeline. It was compelling, if a little melodramatic. I thought he was exaggerating, possibly to increase sales.

The story of the "Great Expulsion" was all too true.

The Acadians had settled Nova Scotia in the mid-1600s. When the British conquered the province in 1710, they had no great affection for the French-speaking farmers. Suspicion grew into contempt then distrust then intolerance.

From 1755 - 1764, they kicked the Acadians out -- 11,500 men, women, and children were forcibly deported -- scattered along the eastern seaboard of the United States (or some to France).  Families were separated. Farms and homes destroyed. One third of them died.

It was not until July 28, 2003 -- more than two centuries later -- that Canada's Governor General (representing the Queen of England) declared July 28 "A Day of Commemoration of the Great Upheaval."

Now there is a national park at Grand Pre, Nova Scotia.

In the park, there is a statue of Evangeline -- a fictional character representing the thousands forced from the lands they had transformed into farms and homes. 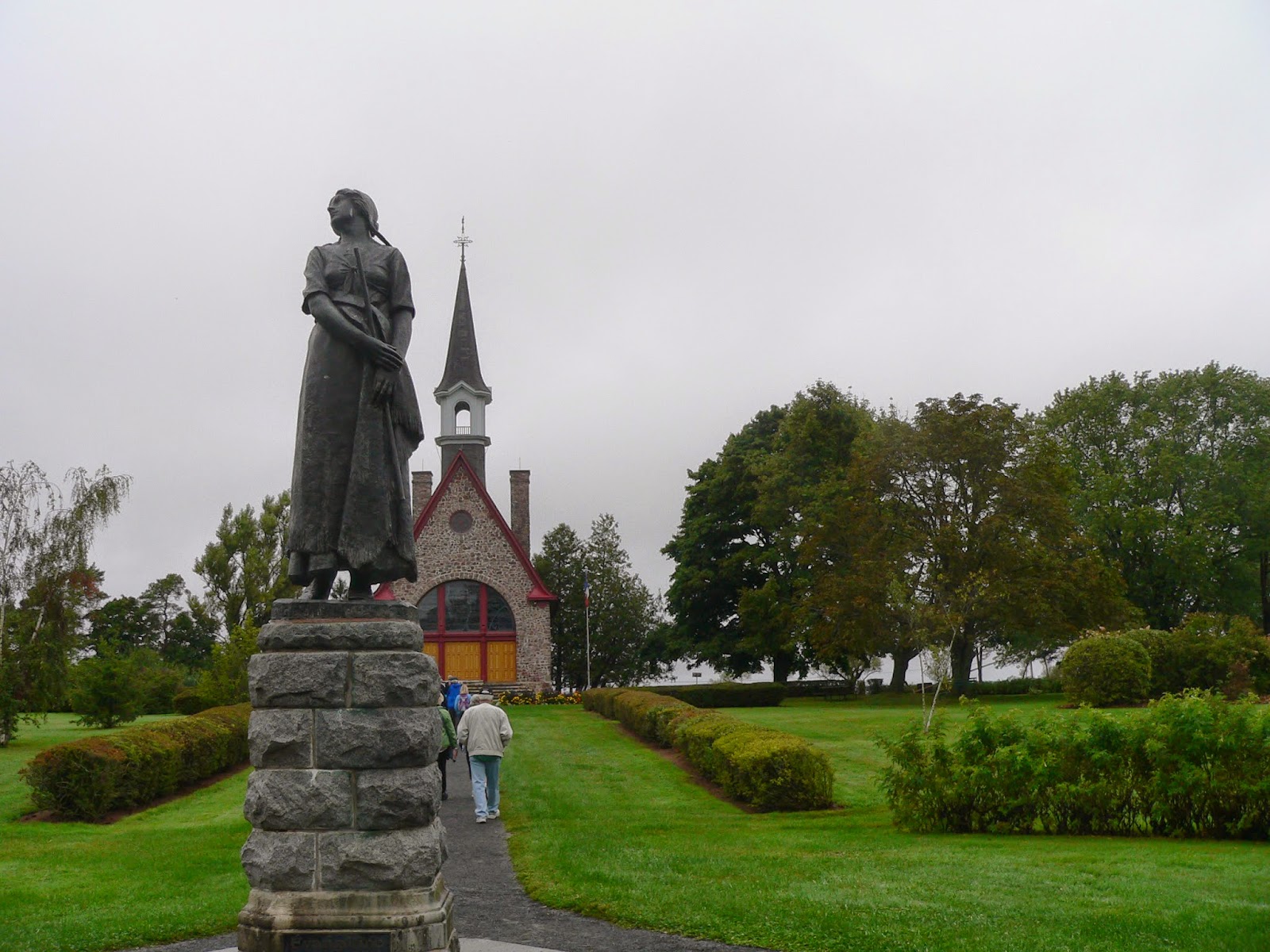 And in the memorial chapel, there is a blue stained glass window depicting the people being separated from the land . . . and from each other. 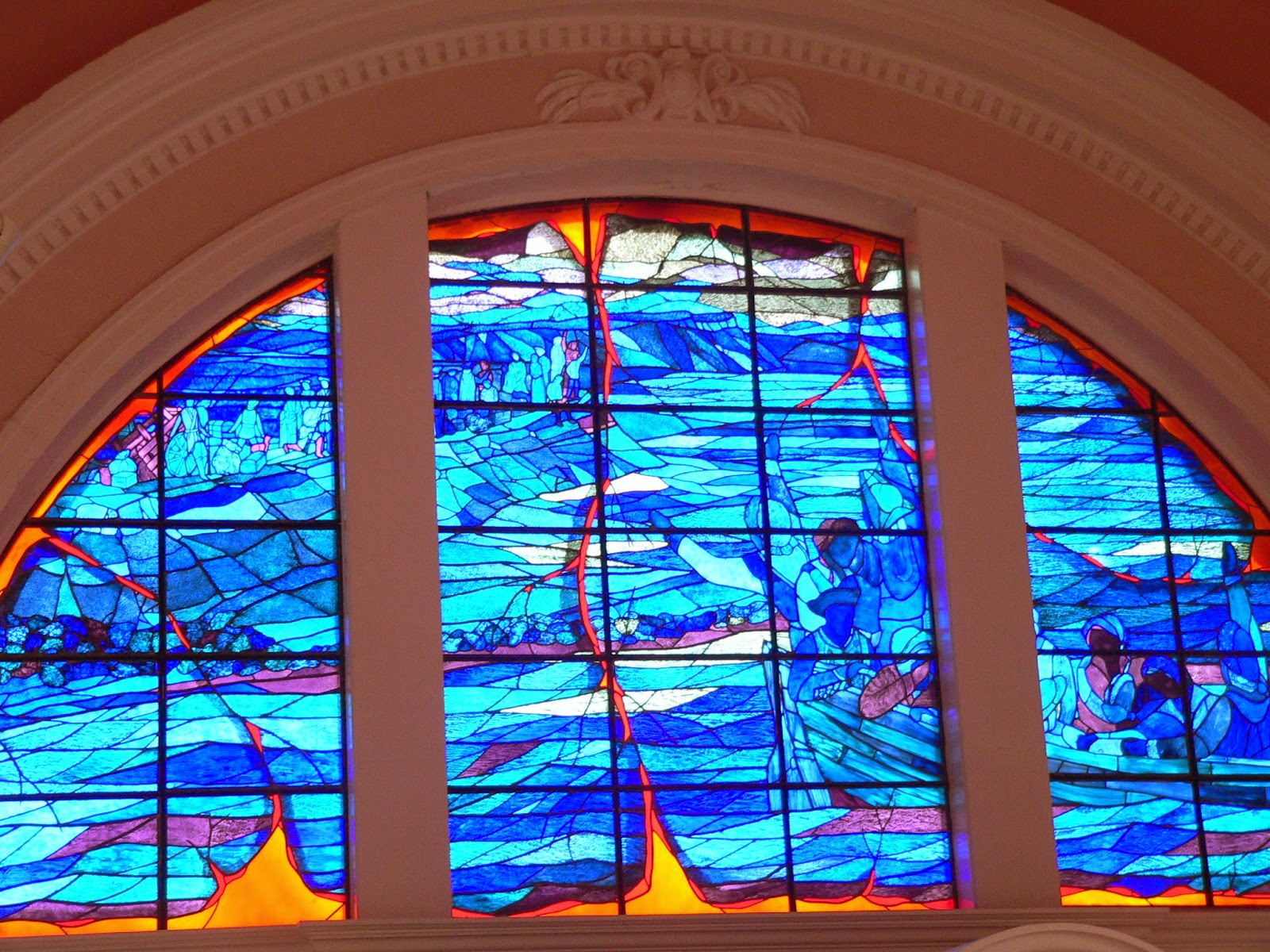 Sometimes it is important to believe in poetry.
Posted by Mim Neal at 4:55 PM No comments:

Sometime in the early 1600s the people who would be known as Acadians had traveled across the Atlantic Ocean to new and unfamiliar land (Nova Scotia) on a huge bay (the Bay of Fundy). There were people there before them – the Mi’kmaq – friendly Native Americans who apparently felt there was room enough for all. 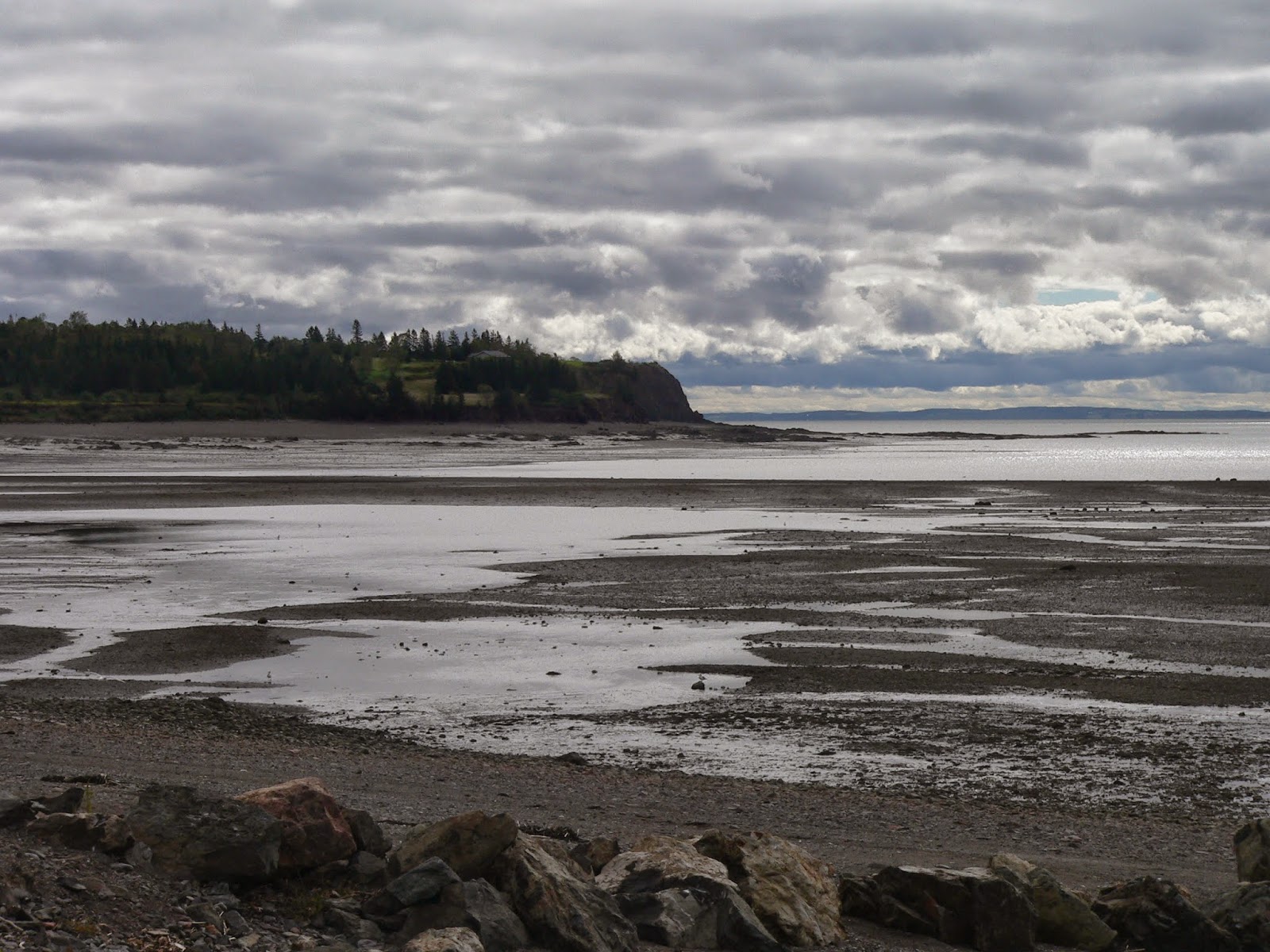 The Acadians looked around at the land – a mix of thick forests and sea marshes. And watched the tides. None of them had ever seen tides like these. Every 6 hours and 13 minutes the ocean rose or fell – often 30 feet or more. And when they rose, the tides flooded the sea marshes with salt water. 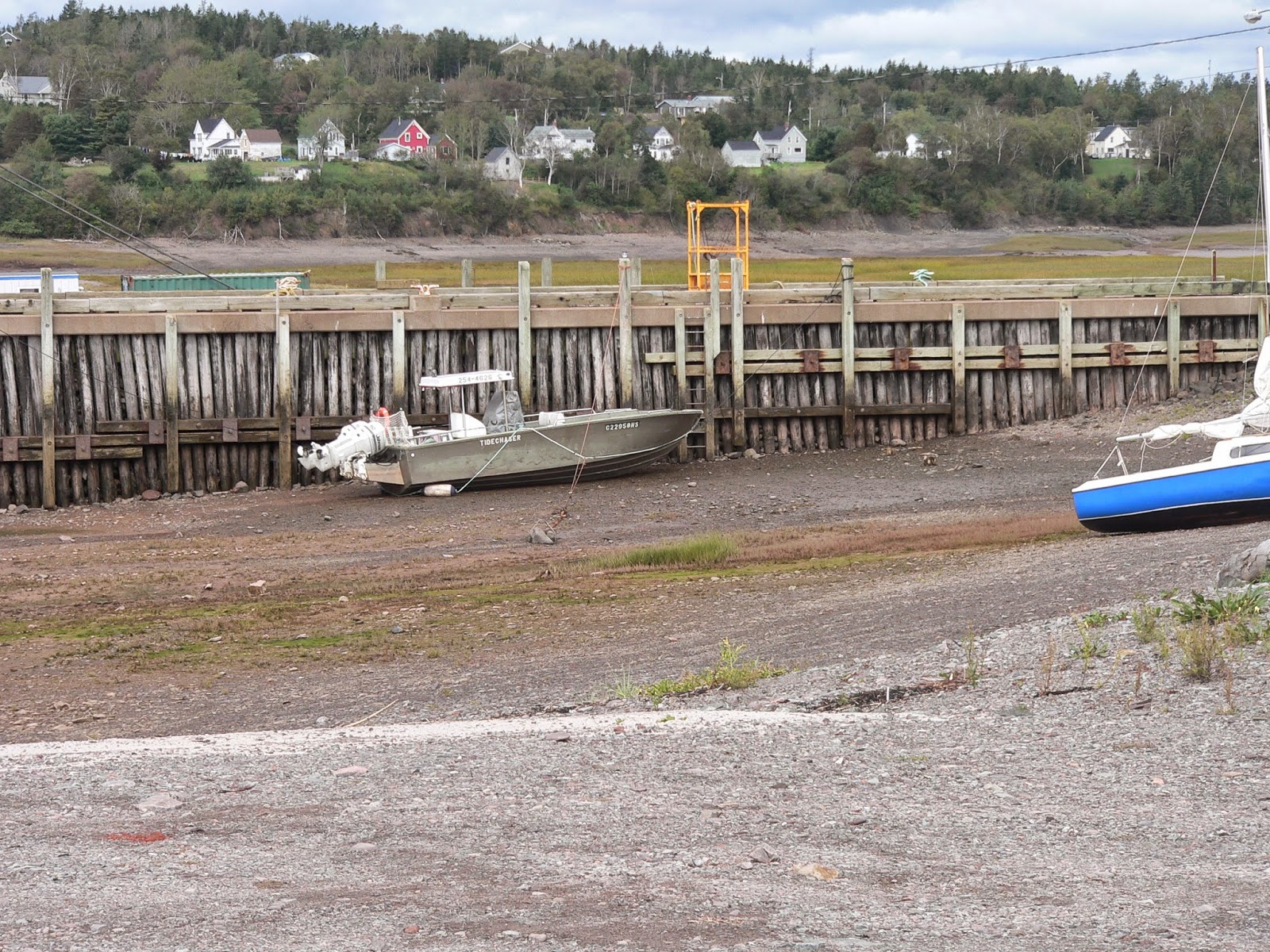 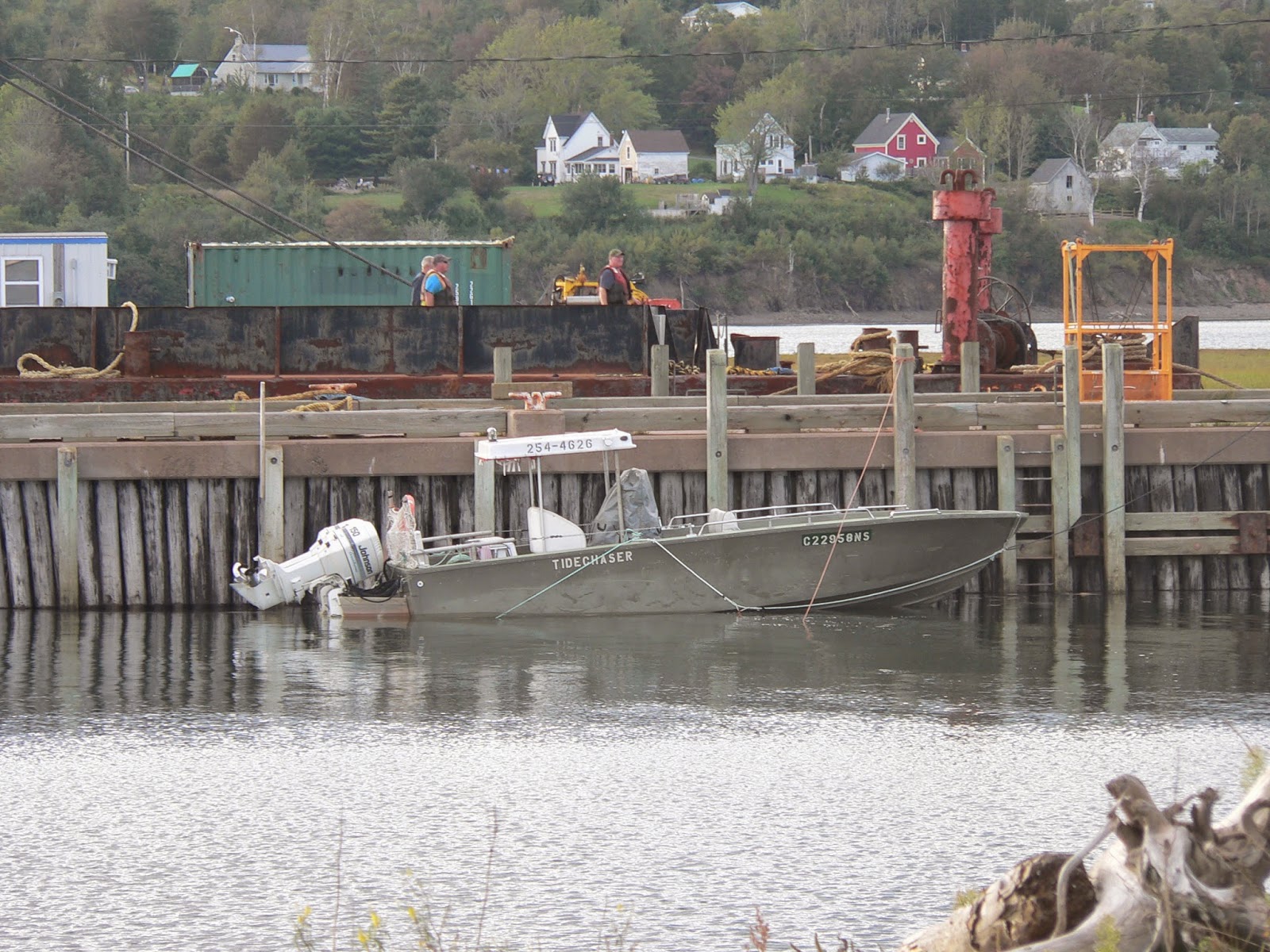 To survive, the settlers would have to either clear the forests or transform the marshes. The Acadians transformed the marshes. They created a system of drainage ditches combined with a one-way water gate called an aboiteau. The aboiteau was a hinged valve in the dike which allowed fresh water to run off the marshes at low tide but which prevented salt water from flowing onto the land as the tide rose. After letting snow and rain wash the salt from the marshes for between two and four years the Acadians were left with fertile soil which yielded abundant crops.

There were other ways to take advantage of the tides. Using branches, the Acadians built huge cages at the edge of the bay. These would be submerged when the tide came in. When the tide retreated, the Acadians would pluck fish (mostly cod) from the weir like picking apples from a tree. 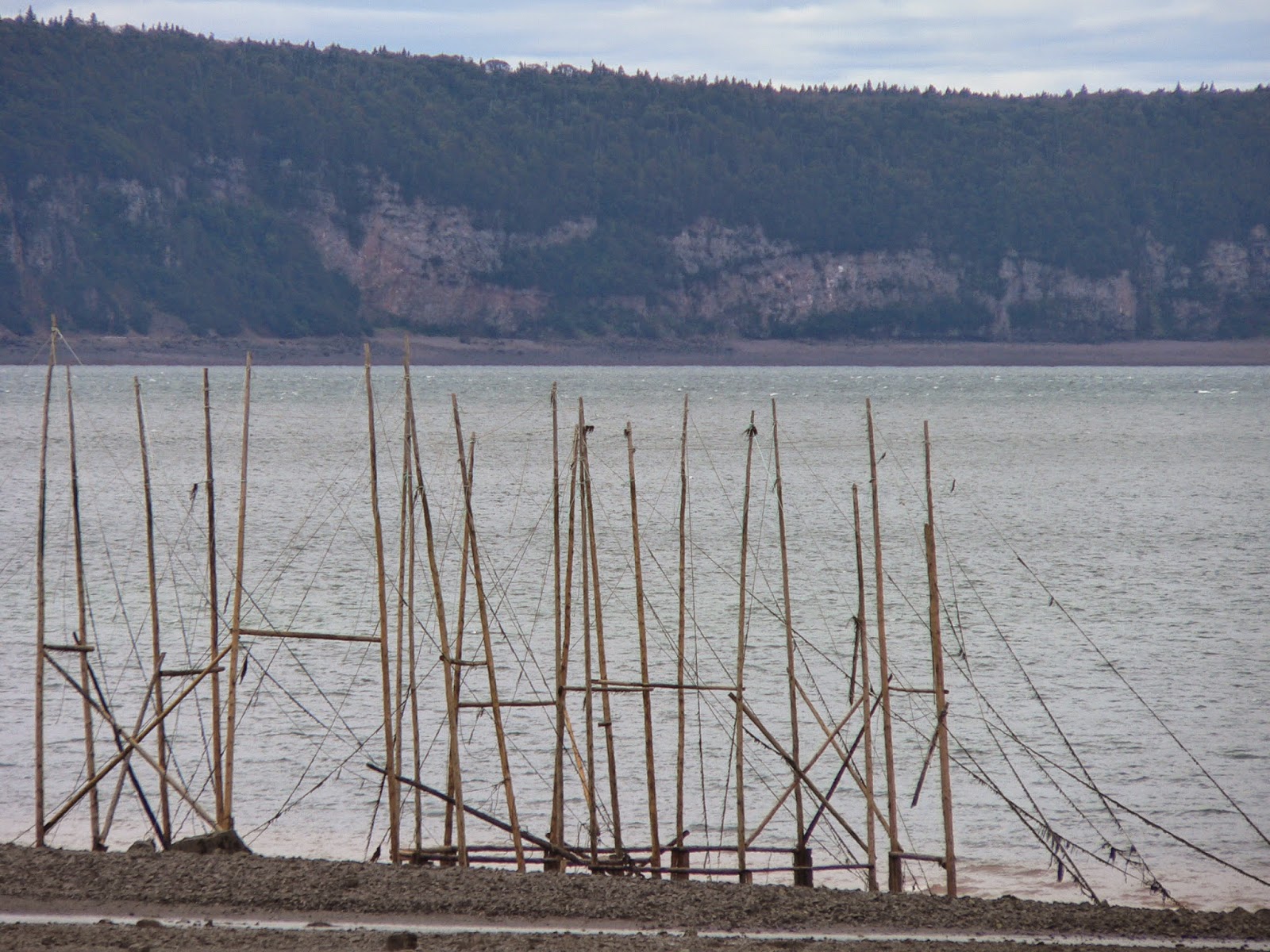 They came, they paid attention, and found ways to create a comfortable life in the new land.