My teeth are good.

I also have diverticulitis – a condition, not a disease – that can slow (or basically, prolong) a necessary bodily function.

But my teeth are good and my hair is still okay.

Oh yes, I also have Reynaud Syndrome which affects circulation in my feet – they can get so cold or so hot that it is impossible to sleep.

And I am borderline diabetic which means I should limit my intake of carbohydrates.

I also have two cats who often sleep with me. And I talk to them.

But my teeth are good.

On days and evenings when I’ve had enough sleep, I can be amusing, sometimes even witty.

I can’t dance worth a damn (but I’m willing to try).

I do not like horror movies of any kind. Nor do I like movies whose main theme is violence. No to most film noir. And no to sappy romantic comedies.

I love good theater but have had enough Neil Simon for my particular lifetime. I actually enjoy Shakespeare and Ibsen and an occasional Samuel Beckett.

I go to church but am not holier than anyone. I’m a Unitarian Universalist which means that I am (most days) willing to learn from whatever religious, spiritual, agnostic or atheist path you may follow. I spent ten years studying and practicing Native American spirituality and I’ve also learned a lot about ancient goddess religions and find many parallels, and great value, in those two world views.

I do not tolerate intolerance. In my view, all people deserve respect (until they cease showing respect to others).

I like good food (and savor great food) red wine and dark chocolate. I am a pretty good (not gourmet) cook (I’ve never made a good pie crust).

I write stuff when I have time but volunteer for too many things so sometimes I go a long time without writing, which feels crappy.

I love to travel – to spend time in a completely different environment and learn other ways of looking at things. And I love to stay home (and play with my cats).

I live near mountains and visit them when I can. I am not a good hiker or really anything remotely athletic (which is a factor in my being overweight). Plus I am old so that’s probably not going to get any better.

I love great art and music – just for being what they are and also for what they can teach me.

I love beauty. It surrounds us all, all the time if we just pay attention. I have two grown sons (who live 1,000 miles away) and some amazing friends, all of whom I love.

I enjoy taking pictures and walks.

I subscribe to the New York Times – Monday through Friday only -- and to the local paper and PBS television.

I play some card games when there’s someone to play with and sometimes play too much computer solitaire.

I love to laugh.

And I love my cats.

I’ve been divorced for 38 years so marriage isn’t a high priority but I’d be interested keeping company with someone -- if I could just be who I am and he could be just who he is. Someone I could have great conversations with, or a fine meal, or share a play or concert or walk in the woods. It would be nice to be held with affection. Even old people like those things.

And, as previously mentioned, my teeth are good.
Posted by Mim Neal at 8:34 PM 1 comment:

The British are so very British

One of the places I went this fall was Lunenburg, Nova Scotia.

It is a UNESCO world heritage site, a fully functioning community, and a remarkably well-preserved town that retains most of the qualities of the original British model colonial settlement.

It was first settled in 1753, when German, Swiss and Montbéliardian French immigrants were brought to Nova Scotia under a British colonization plan. A rigid gridiron plan was superimposed on the slope of the steep hill rising up from the harbour. The new settlement was named Lunenburg after the Royal House of Brunswick-Luneberg, from which the Hanoverian kings of England were descended.

Lunenburg was the second British colonial 'model' town plan, after Halifax (1749). The model town was an important aspect of imperial policy for the British, to provide the functional space thought necessary for the smooth working of a colony. The Lunenburg plan (1753) incorporated all the principles of the model town: geometrically regular streets and blocks; the allocation of public spaces; an allowance for fortifications; and a distinction between urban and non-urban areas. Of these all but the fortifications survive in present-day Lunenburg.

So. Why the title: "The British are so very British?"

I remember once long ago hearing Jack Parr comment that he imagined that British women wore tweed nightgowns.

Please note: "A rigid gridiron plan was superimposed on the slope of the steep hill rising up from the harbor." -- An architectural version of a tweed nightgown.

It was not architecture adapted to the site but a site adapted to a gridiron plan.  Like, later, the British soldiers who marched in formation as the American rebels mowed them down from the bushes.

But it is beautiful. 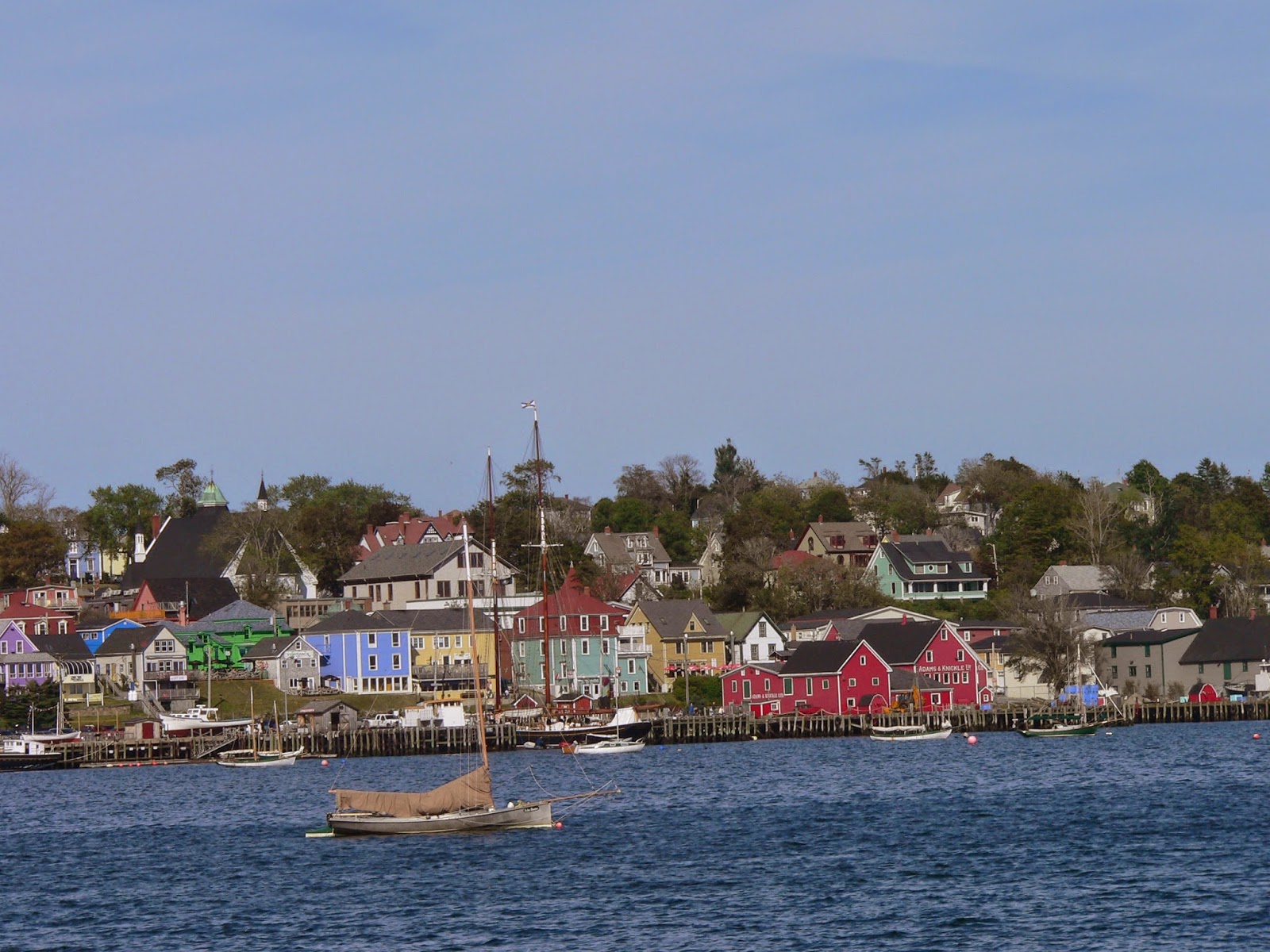 Sometimes there is nothing whatsoever wrong about being very British.
Posted by Mim Neal at 12:13 PM No comments:

To the dozen or so people who follow my blog, I here relay reassurances.

I AM still alive. I am just stumbling out of a marathon of travel and guests and civic and church activities and will, this very afternoon, actually re-invigorate this particular form of communication to the cyberspace community.