They have closed the lake in Loveland, Colorado.

Lake Loveland isn't really a lake. It's a reservoir disguised as a lake. [It works. People swim and boat and water ski in it and on it.]

The water is being used to irrigate fields. That's what it's there for. It's the end of summer and hot. The crops (mostly in Greeley) need water. Every day there is less and less water in the lake.

I wonder. What if they drill more fracking wells? (Greeley has a lot of them.)
There will be even less water.

There will be even less water.

Some day – sooner than we think – there will be no water.

No place for boats and swimmers and pelicans.

But with more fracking wells, we'll have natural gas to export and jobs to generate income so we can buy all those houses and all the water those families will need.

If we can find water.
Posted by Mim Neal at 8:01 PM No comments:

It had been one of those days when nothing happened the way I had planned, and things that were supposed to have been fixed didn't work, and I was generally disheartened. Perhaps I should have gone upstairs and worked on my book, but I wasn't exactly inspired. That's when I remembered that, after a summer of abominable movies, there were two films I actually wanted to see.

One of them was, 'Lee Daniels' The Butler'. Checking the show-times, I figured I could make it if I didn't dawdle. So I went. And I'm glad I did. It's an excellent movie, reminding me of so much of my country's history that I, like the butler, Cecil Gains (Eugene Allen) (Forest Whitaker) have lived through. And how much I (and some others) have learned from the civil rights movement.

I got home, fed cats, did chores, ate dinner and was about to open the book I've almost finished when I turned on the television to see if, by some miracle, there was anything worth watching.

My PBS station was broadcasting an American Masters program on James Baldwin. It was riveting, in some ways more moving than the film I had just seen.

I am white. Always have been. Always seen the world from the white, middle-class perspective, viewing events from my safe, privileged point of view.

Pondering the stories of the butler and the author, it occurred to me that much of my world – and its attendant comforts, is illusory.

James Baldwin knew only the painful, dangerous, violent, contradictory mess of the world he transmitted to the rest of us through his books.

They knew authenticity. To the extent allowed by circumstances, they lived authentically.

As we approach the 50th anniversary of Rev. Martin Luther King Jr.'s great speech, it's a good time to be reminded of what we have overcome … and of how much more we have to learn.

Through an extraordinary confluence of one movie and one television program, I now remember.
Posted by Mim Neal at 1:23 PM No comments:


All of a sudden, my neighborhood is alive with sunflowers. 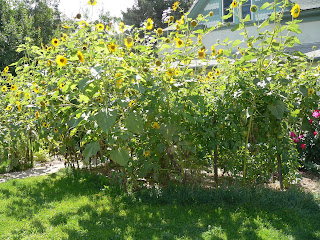 They have exploded in front yards,
back yards,
side yards
and parking lots. 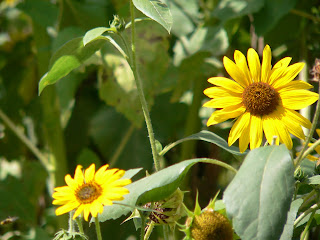 It is a glorious celebration of August
and the waning, but still hot, days of summer. 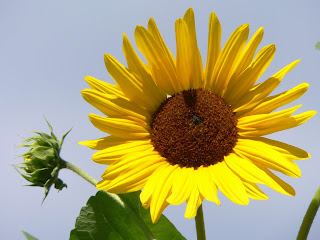 Hallelujah!
Posted by Mim Neal at 11:12 AM No comments: 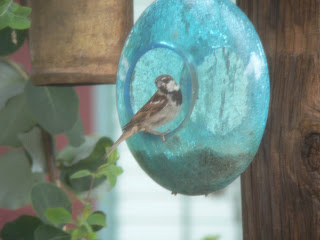 and
the occasional squirrel 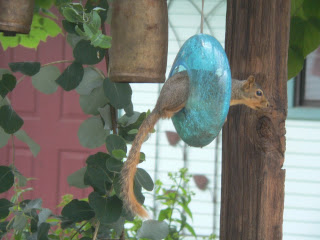 who seems to mistake it for a tire swing.