My decision to go to the General Assembly of Unitarian Universalist Congregations wasn’t a well-considered, rational choice. It was pure impulse, prompted I think by a vague sense that immigration issues (which I didn’t really understand) were issues that I could no longer ignore.

There was no way to ignore them in Phoenix. The General Assembly was replete with information about immigration issues. I began to understand that these issues were people – people afraid to go to work lest they be arrested, thrown into a private prison, permanently separated from their husbands and children, with no legal rights, no legal recourse. No hope.

One afternoon, I left the convention center to see a documentary called “The Minister’s War,” the story of a Unitarian minister, Waitstill Sharp, and his wife Martha. In 1939, their Wellesley, Massachusetts home was filled with news of the war engulfing Europe. One Sunday, Rev. Sharp stood at his pulpit and declared war on Nazi Germany.

Martha Sharp remembered, “We realized that we were living at the front lines against Nazism. We had never felt such an urge to act before it was too late – to save these brave people, to help them save their world and our own.”

So they acted. They left their young children with friends and flew to Europe. In Nazi-occupied Prague and Paris, in the detention camps of Vichy France and on hidden trails through the Pyrenees, they risked their lives to rescue thousands of refugees, including anti-Nazi dissidents and Jews. It was a powerful and important film – that turned out to be a theme for my experience of GA.
***
I stayed in the hotel closest to the Convention Center. One afternoon, I took the escalator from the first to the second floor. Looking down, I could not help but notice the manufacturer’s name: Schindler.
***
On June 23, before participating in the Candlelight Vigil at Tent City Jail, I heard Maria Hinojosa, anchor and managing editor of NPR’s Latino USA. She said Nobel Peace Prize Winner Elie Weisel had advised her to question using the term “illegal immigrant.” He said there is no such thing as an illegal human being. He said that term was dangerous -- that the Nazis declared the Jews to be an illegal people and that was the beginning of the Holocaust.

Maria told about conditions she had witnessed in immigration detention camps where people were not just fed bad food, they were hungry. People who were not criminals were being held by our government in windowless rooms with no drinking water.

She talked about a conversation with a young, humble woman who told of her experience in a detention center. She said that when their guards would find a bed bug or lice, they would line up all of the women detainees, disrobe them and take out all of the bedding. Then the guards would make the women stand in line, naked, for the open showers. The woman told her: “There was a movie I watched as a kid and I felt like I was in it at that moment...did you ever see that movie? It's called “Schindler's List.”
Posted by Mim Neal at 6:04 PM No comments:

In Praise of Granola Bars

After my recent camping experience during which they often comprised breakfast and/or lunch, I resolved to never again consume granola bars.

Still, looking at the flight schedule for yet another trip – noting that no meals would be provided – I tucked several of them into my carry-on.

Good thing. On the way to my destination, my first flight was delayed so long that getting to my second flight required sprinting (something at which I am not particularly adept). There was no time to buy anything resembling food. Fortunately, I had something resembling food in my carry-on. So I ate it.

Then on my way home -- my 5:30 p.m. flight was canceled and the airline took about three hours to figure out what to do with their stranded passengers. Fortunately, I had purchased a ‘wrap,'half of which I consumed while arrangements were being made. They eventually decided to bus the lot of us to another airport – three hours away. I got on the bus at 9 p.m. and on the bus consumed the other half of the wrap. We got to our hotel around midnight. After about three hours sleep, I awoke in time to shower and catch the shuttle to the airport monorail. My 6:54 a.m. plane took off at 7:15 a.m. And I ate another granola bar.

This morning, I discovered that, although I had gone to the grocery store, I had failed to get granola to sprinkle on my yogurt and berries. Then I saw it: the last granola bar. Crumpled, it was a delicious topping.

My advice: keep granola bars on hand, and on planes, whenever you travel. You just never know.
Posted by Mim Neal at 2:05 PM No comments: 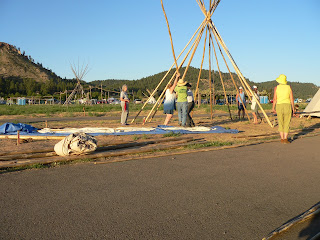 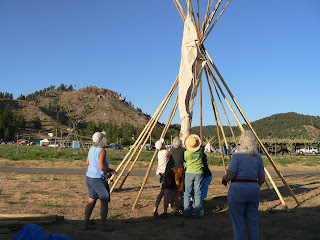 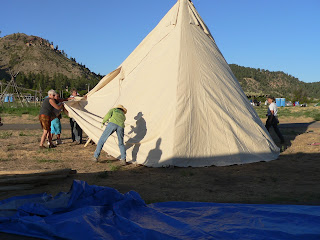 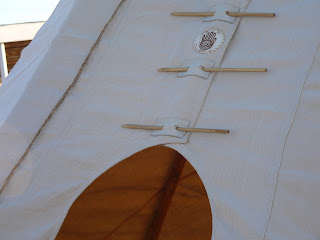 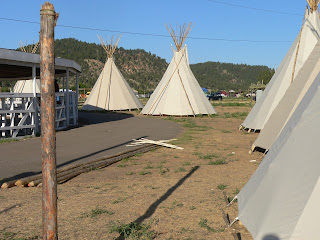 At  the 11th Gathering of the International Council of 13 Indigenous Grandmothers, women erected tee pees for each of the magnificent teachers. Horses and riders re-enacting the Cheyennes' Long Ride from Oklahoma reservations to their Montana home became part of the ceremonies, along with wolves, on the Northern Cheyenne Indian Reservation.
Posted by Mim Neal at 11:15 AM No comments:

They want to know what you’re talking about. They think they sort of know. You tell them you are going to the 11th Council Gathering of the 13 Indigenous Grandmothers.

It will be held on the Northern Cheyenne Indian Reservation in Montana.

“Do you have Native blood?”

Their faces become, if possible, even more blank.

I can imagine their unspoken question: “Why would an old white woman go to an Indian reservation where she will have to camp to listen to a lot of old Indian women?”

First, not all indigenous people are Native American. The grandmothers come from Brazil, Central America, Gabon, Nepal, Tibet and New Zealand as well as from the Americas.

Second, I went to learn, to join in their prayers and blessings and to be part of their efforts to heal the earth – not just from environmental degradation but also from the myriad atrocities that have covered the planet with blood.

“Okay.” My listener is doubtful. "How can someone learn from aborigines? They are invisible. They have no culture. They are primitive and conquered peoples."

The 13 indigenous grandmothers represent cultures that go back thousands of years – before there were governments – to the time when people and animals and plants and places could communicate – learn from one another. If the earth is to be healed, if our species is to be healed, these are the women who can help us accomplish this.

Born and raised in the ultimate consumer culture, I need their perspectives.

Born into a patriarchal, misogynist culture, I need their energies to empower balance and harmony between the sexes.

All of us have genetic memory of prayer circles and sacred fires. Remembering our original ways of being is a process. This process is facilitated by those with an umbilical cord connection with the earth.

That’s why I went to the 11th Council Gathering of the 13 Indigenous Grandmothers
Posted by Mim Neal at 11:00 AM No comments: 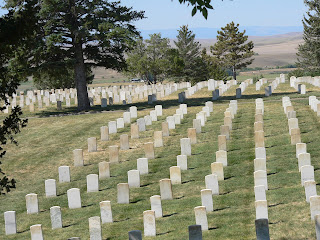 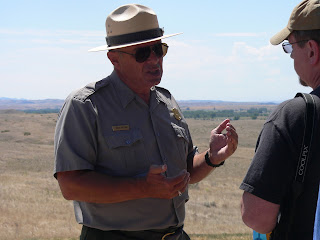 But that isn’t the end of the story either. After getting the ranger’s autograph and email, I proceeded east on the Northern Cheyenne Indian Reservation where for four days I absorbed incredible wisdom from indigenous women elders/grandmothers. They are still here. But more on that later. For now, this is my thanks to Ranger Interpreter Steve Adelson.
Posted by Mim Neal at 12:13 PM No comments:

Wyoming Highway 14A curving west and up from Burgess Junction, Wyoming, is breathtaking in its perpendicular-ness and attendant scenery. Gold and purple wildflowers, stunning vistas, and amazing cliffs suffuse you in awe – appropriate preparation for the Medicine Wheel. 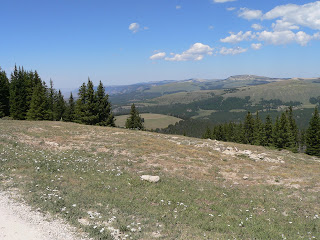 Driving up a gravel road above the tree line, you approach the entrance. From a certain point, you are asked (if able) to walk the one and a half miles further up to the site of wheel. 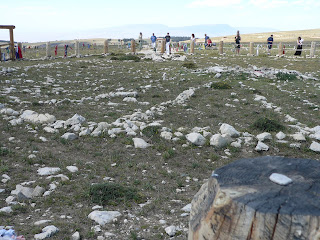 When you get there, a path leads left around a pattern of gathered stones surrounded by posts and wire. The wheel is 80 feet in diameter. In its center is a doughnut-shaped pile of stones, a 12-foot cairn, from which 28 lines of stone extend to the rim. Six more stone cairns are placed in the circle, like camp chairs. 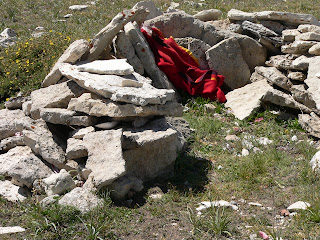 The 28 lines or spokes of the wheel probably correspond to the days of the lunar month. Everything about the wheel is astronomically aligned. Four of the smaller cairns line up with the rising and setting sun of the summer solstice and the others with the three bright stars that fade as the summer sun rises. 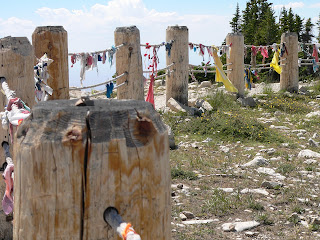 This is a place of prayer. It has been for at least 800 years – probably more. It is still used for ceremony and vision quests. Prayer ties and other offerings are tied to the posts and wire and some can be seen inside. I shared a ride to the site with two couples who knew nothing of Native American traditions. Their reaction: “This is a very prayer-full place.” Well said. 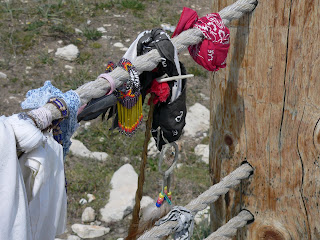 Photographing the offerings, I was attracted to an abalone shell in the wheel’s interior. Only after getting home did I discover that it sat beside a model of a white buffalo – a prayer, within a prayer. 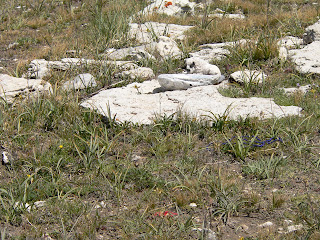 May the power of tens of thousands of prayers permeate our world, healing us all.