A lot of what Colorado calls lakes are really reservoirs – storing water for when it is needed.

What Loveland, Colorado calls Lake Loveland is really just a lovely, wet holding pond for the water that Greeley farmers can use when it’s urgently needed.

It’s urgently needed now. It has been hot and dry for two long months. The whole world seems dehydrated. Each day the shore gets bigger and the lake gets smaller. Monday may have been the last day local kids and grownups could splash in the coolness and play in the sand.

The lake will close.

That’s sad but we need the things that Greeley farmers grow and they won’t grow without our water.

I used to live in Chicago, on the shores of Lake Michigan. It never closed (although sometimes it washed up things like dead fish that made it less appealing).

Water dictates our lives. Not just for splashing. For growing and fishing and drinking.

Sometimes, in Chicago’s summer sauna, I used to wish for dry. Now I have dry. And I also have a deeper appreciation of water magic.

Eating dinner outside tonight, my friends and I reveled in the lovely cool drops that fell from the reluctant sky. We celebrated the brief rain, the brief respite from the heat, and the refreshing swoosh of wind.

The lake will close but we will carry on.
Posted by Mim Neal at 9:32 PM No comments:

I just walked through an exhibit at the Loveland Museum/Gallery. Actually, two exhibits very much related to each other: “Hobos to Street People” and “Dorothea Lange – Precarious Lives”. Both deal with homelessness and poverty and desperation.


These are human conditions – like the lives of immigrants – that I have long been able to ignore -- to remain only vaguely aware of people struggling on the periphery of my middle class comfort.


But once you are aware – once you see what has heretofore been invisible – you really cannot just go on your merry way.


Obliviousness is not allowed.


There is, I believe, a minimal portion of human dignity that all people should enjoy.


I’m not at all sure what I am going to do about what I saw (and now can see).


More than one blog.


More than one act of compassion.


More than one personal encounter.


I have no idea why I have escaped the plight that so many suffer. But all of these people – the homeless, the immigrants, the unemployed – are part of the same fabric of life in which I have my being.


We are, in fact, part of one another.

I called my memoir Tree Lines for lots of reasons. Number one, trees have marked important points of my life, from childhood to now. And tree branch and tree ring and tree root patterns echo the larger patterns of the rest of the world. And the tree line – the altitude above which trees cannot grow – symbolizes elevation, a rising above the norm (which I sometimes do). And in my travels, the trees that the local populace considers to be the oldest are inevitably in a place they consider sacred.

So when one day someone in the benevolent universe decided to publish my memoir, I envisioned a cover showing a literal tree line. But covers are the publisher’s choice and that’s not what my publisher has chosen.

Nonetheless, just this past weekend, two friends took me up into Rocky Mountain National Park where Old Fall River Road climbs, almost perpendicular, to the top of Trail Ridge Road. I had been there before. I knew that that challenging, unpaved, steeply ascending road offers the most spectacular views of tree lines and glacial indentations.

We set out toward the mountains --- 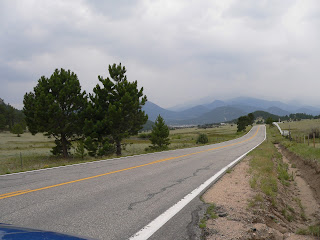 Stopping occasionally to admire wildflowers and other wonders. 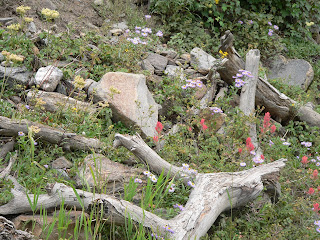 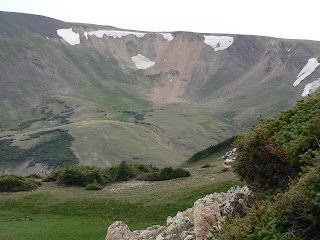 Shazaam. And HALLELUJAH.
Posted by Mim Neal at 3:33 PM No comments:

[Looking for another document, I found this -- written six years ago, still true.]

On the Orkney Islands (north of Scotland) there is a 5,000-year-old ceremonial tomb. I have walked through its low, narrow entrance tunnel on two occasions. Both times stunned. The engineering is amazing: a huge domed ceiling, three precisely carved side passages and the tunnel designed so that on only one day a year, the winter solstice, the setting sun shines through and lights up the whole chamber.

Nearby is Scara Brae, a Neolithic village occupied from 2,500 – 2,000 B.C. by a community of between 75 and 100 people, who lived in peace and prospered in co-joined dwellings complete with indoor plumbing. Five hundred years – 4,000 years ago.

We as a species have a certain arrogance, perhaps hubris, about our high-tech civilization, which we think began, at the earliest, a few hundred years ago. We have a tendency to see our distant ancestors as primitive, brutish, and devoid of culture. We are not looking deeply. In the grand scheme of things, in the entire chronology of the universe and our planet [roughly 4.5 billion years] humans, as we think of humans, have been around less than 100,000 years, the tiniest fraction of all time.

For at least 50,000 of those years – in most ancient cultures – women were honored. Our ancestors’ ancestors believed the fundamental cosmic force was feminine. Many worshipped a female deity. In their communities— hunter/gatherers perched on the edges of savannahs, or early farmers in small hamlets or villages -- they shared ceremonies, dances and stories that reflected gratitude toward the whole living world and their participation with other species in the round of life.

These attitudes (the inherent worth of all individuals, and the interconnected web of life of which we are a part) today struggle for general acceptance. Some of us despair, thinking that these attitudes are reflected only as the names of certain mountains or stars or as oblique, so-called pagan symbols tucked into the cathedrals of the more hierarchical, anthropocentric and patriarchal cultures that followed. But the round of life is intrinsically, a circle. Season follows season. And, if we look deeply, we can still learn from those who lived in the springtime of our species. We don’t have to give up air conditioning or computers . . . we need only abandon the fantasy that we are above the past and separate from the rest of life on earth.
Posted by Mim Neal at 11:32 AM No comments:

At about 8 p.m., Saturday, June 23, I boarded a yellow school bus, one of hundreds driving from the Phoenix, Arizona, Convention Center to Tent City Jail on the city’s outskirts. There was a pumpkin yellow river of buses flowing through the heat in the fading light. I think every passenger, and every driver, was a little nervous.

The annual gathering of representatives of North American Unitarian Universalist congregations had been billed as a Justice General Assembly. In worship services, plenary sessions, lectures, and workshops – even at the bookstore –participants heard story after story of how our local, state, and national governments treat undocumented immigrants. We had been appalled. Now we were going to hold a vigil outside a notorious detention center. More than 2,000 prisoners were housed in tents, almost unprotected from Phoenix’s extreme temperatures.


I didn’t know if I could do it: stand for hours on concrete in 100-degree heat, in the midst of a crowd. We just kept coming – busload after busload—shuffling further into the alley outside the curving barbed wire fence, easing our way around the stage being assembled on a flatbed truck. The area was rimmed with police in dark blue uniforms – they were our guardians. Others on the fringes snarled epithets, which we mostly ignored. Some of us were handed flashlight candles. I got a laminated yellow sign proclaiming “Standing on the side of LOVE.”


Somehow, I wound up right in front of the stage. Even as microphones were secured and our crowd accumulated, we were urged to sing – to sing loud enough for the inmates to hear. I tried. And the crowd kept coming, busload after busload, until there had to be 2,000 of us – as many outside as inside. The stage evolved. More performers and speakers arrived. Our songs and slogans got louder. There was no way to know how much time had passed. Evidently an official delegation had toured the prison. I could see their faces as they climbed into the spotlights. They were ashen. Each man and woman had been visibly shaken. “I cannot believe people are treated like this in my country.”


Television crews started showing up. Every time I saw a camera, I held up my yellow sign. And kept singing and shouting slogans. And drinking water. I had brought a thermos, soon empty. Extra water bottles were passed. There always seemed to be enough. I don’t believe I ever sweated more profusely.


Eventually, almost mysteriously, we got the signal. Those of us in the front began walking back toward the buses. Those in back moved close to the stage. Everything was slow, deliberate.


We were told that our vigil got a lot of media attention. I hope so. I hope what we did, did some good. I hope someday we as a nation treat all people, and families, with dignity and respect, whether they have documents or not.


And I hope the inmates heard our songs.
Posted by Mim Neal at 11:35 AM No comments:

When I first moved to Colorado, I was amazed and delighted by the preponderance of sunny days.


Recently, not so much.


For weeks now, we’ve had temperatures in the three digits (or too darned close to three digits) exacerbated by huge fires which, while never endangering my home and cats, have filled the air with particulate matter and/or smoke.


There was an old song about this, something like, “Too Damned Hot!”


[For all the hundreds of people who lost their homes, for all the trees burned, for all the animals threatened, I acknowledge that my discomfort is a minimal concern. I extend my sincere sympathy and note that I, like everyone else in this state, have been doing all that I can think of to induce the rain we all so desperately need. I even got my car washed.]


Ah, but yesterday. Yesterday we had cloud cover and even a little rain. It was marvelous. Civilized. Almost comfortable.


It is still hot, but reasonably hot. Right now, it’s clouding over again. There is hope – at least I have hope – of rain.


Having spent many of my younger years in places where gray skies were the norm, I never, ever thought I would celebrate clouds. But I do.


Hooray for the gray!
Posted by Mim Neal at 3:24 PM No comments: