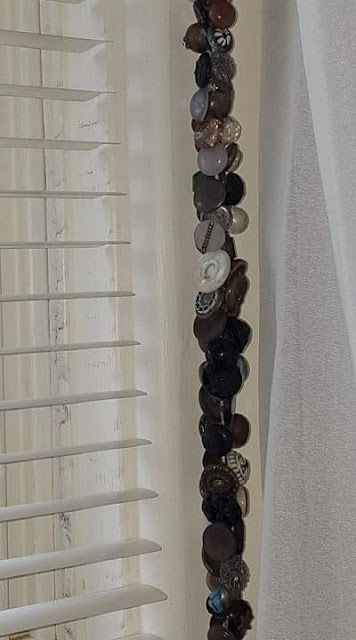 Have you ever seen one of these? It's a button braid. I found it when I opened a trunk containing family memorabilia. It was made, presumably, by one of my female ancestors and reflects a time when nothing (or very little) was wasted.

People used to save string. Take one bath a week. Darn socks. Use ink in fountain pens instead of buying [then throwing away] disposable ballpoints. I'm sure you can add to the list.

I'm not sure how a button braid might have been used. Was it a way to keep buttons in one place, available when needed?  Or was it just a way to use old buttons as decoration? That's how I use it, on the north edge of the west-facing window in my guest room, which I call my ancestor room because the walls are adorned with photographs of preceding family. The room reflects not only the people but also the attitudes and practices of those who came before me

I decided to post the photo on EARTH DAY.

We live in a world with an exploding population and diminishing resources. We could learn from our predecessors. We could become more aware of profligate consumption and excessive disposal. Find ways to use less, reuse more. We all could do something, even if only taking shorter showers.

If a gazillion or so of us became a little more careful with the resources we use, next year's EARTH DAY we be a grand celebration indeed.

This is a bird feeder. 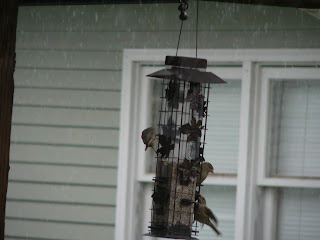 This is a squirrel stealing birdseed. 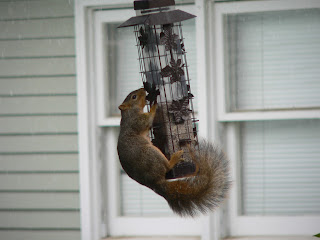 For months – well actually ever since I put the bird feeders up – I have considered squirrels my arch enemies. Triumphant arch enemies.

Sometimes when I open my back door, as many as seven of the furry rodents scamper away, up my tree, over the roofs of my neighbors’ garages on the east and west sides of my yard.

I leave. They return.


Once you start giving squirrels names, you are doomed.

Creatures with names are no longer arch enemies. They are individuals to which you pay attention, which you tolerate, which you sometimes find amusing. Acknowledging individuality means acknowledging worth [or something roughly the equivalent].

I wonder if the same thing might apply to humans.
Posted by Mim Neal at 8:47 PM No comments: