Herbie and the Catnip Banana

All of a sudden, there’s just me – pretty boring. Pretty sad.

When I picked up some supplies at the pet food store, I asked for suggestions that might cheer him up. The young man suggested a catnip banana. I’d already purchased some catnip mice, which seemed far more appropriate. But we were at a low ebb, all ideas welcome.

When I got home, I began building a ‘playground’ for Herbie – hiding the mice and banana under some tissue paper atop a strange battery-powered toy donated by my friend Marie.

It was not an immediate success. Mostly he just watched as the tissue paper undulated enticingly. Then, literally, he leapt into action. 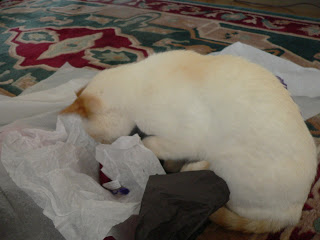 I got down on the rug and helped animate the field. He played for at least 10 minutes (almost a record attention span for my sweet blond).

This morning, I put out his dry food. He ate a little. Then he ate a little of other offerings. Then he meowed as if he needed something else. So I picked him up and petted him. When I put him down, he meowed some more. I got up. He led me into the living room – site of the playground. I got it. 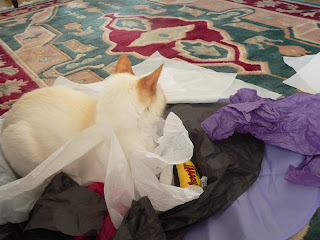 And we played again. We are going to be okay.
Posted by Mim Neal at 4:52 PM 2 comments:

With them, we played fetch or catch. For catch, I’d throw balls up the stairs and he would bat them back. By himself, he played a sort of soccer, propelling the glittering things all over the house.

His adopted brother, Herbie, had no interest in fuzzy balls.

Guinness played with other things – all kinds of other things – even other cat toys. And he chewed stuff – cardboard boxes, manila folders, random papers. But his favorites were the fuzzy balls.

On Monday, May 2, after four months working with the vet and the steroid shots that kept him going, we had to give up.

He lay on a blanket, close to my extended right arm as I pet him with my left hand and talked to him about how cool he was.

Even then, he purred. Not as loud as before – when he sounded much like a tractor. But he purred for a while. Then silence.

What a great buddy he had been since the day I brought him home in October 2002 when he was almost one year old.

In his memory, I filled a glass vase with fuzzy balls and attached a laminated photo. I think he would have liked that. 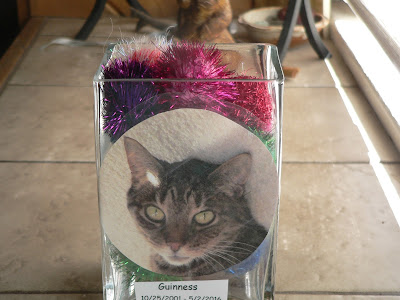 I recently participated in a Roads Scholar Writers Workshop at the Green Lake Conference Center (900 acres somewhat northeast of Madison and southwest of Green Bay). We had assignments following the theme of Lost and Found. Here's one of the pieces I wrote, Happily Ever After,

She believed them all: Cinderella, Snow White, Maybelline, “An Affair to Remember,” and Seventeen magazine.

Not to mention several thousand years of patriarchy distilled into her father.

When it hailed on her August wedding day, she carried on.

When her husband couldn't sustain a career and began drinking, she carried on.

When he became the world's foremost authority on everything in the world, she carried on.

When he tried to erode her already fragile sense of worth, she faltered but carried on.

He cut her 'allowance'.

There was never enough money for groceries but plenty for luxuries.

Some things, many things, were wrong.

Her doubts became stronger than her faith in fairy tales.

Her survival instincts grew stronger than her fears.

She catapulted out of suburban nirvana landing at the edge of the city, on her feet,

She tore her sons out of their dream of family. Wounded, they survived.

What happens when a myth dissolves?

And gradually, you carry on.

Of course there is never a happily-ever-after.... but you come pretty close.
Posted by Mim Neal at 12:10 PM No comments: