Driving down the highway, I was listening to my NPR station when, for reasons of musical history, it broadcast an early rap song in which the vast majority of words was ‘bleeped.’

Did you ever wonder how that happens? I did, so of course I went online to find out.

For ‘live’ broadcasts (like the Daily Show), there are two components to bleeping: a one minute broadcast delay (to allow time for bleeping) plus a software module, operated by a technician who (with remarkable reflexes) substitutes the familiar bleep sound for unacceptable language.

What an odd job.

What would happen to the psyche of a person who must (in order to earn a living) be totally focused and alert for those words that should not be (but often are) used in ‘polite company’?

Imagine spending eight or so hours a day listening for ‘fuck’ or similar terms. What would happen if, having been so trained for so long, the technician began censoring his/her friends at the local bar?

Let’s not go there.

What would happen if said technician had a bad night’s sleep and, reflexes dulled, missed an occasional expletive? Heaven forefend!

On the other hand, what if you or I entered the broadcast booth and found the magic module just as an NRA spokesperson began speaking.

Ah! What wondrous joy that would be. But of course that is not bleeping likely is it? Bleep it!
Posted by Mim Neal at 2:32 PM No comments:

Time Out with Benefits

We live 1,000 miles apart so time together is rare. But at the very beginning of 2013, my son came to visit and stayed nearly 10 days! 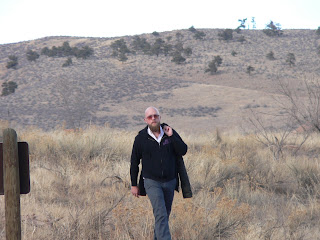 For 10 days, we did just what we felt like doing and talked about whatever we wanted to talk about.

We saw three movies! We went out to dinner sometimes and lunch sometimes. He fixed me a breakfast omelet so spicy I won't have sinus problems for months. And, bless him, he took down my Christmas tree and helped me dis-assemble Christmas. We went to a great exhibit at the Denver Art Museum and had some quality time with my nephew and his family (together and alone) and with my brother/his uncle.

For 10 days I took time out from all the things I am supposed to be doing ... and I still haven't caught up. But, wow! what a great pleasure it was to have him here -- to have time to just enjoy each other.

What a great way to start a New Year.
Posted by Mim Neal at 12:00 PM No comments:

When it became evident that the city of Loveland, Colorado would have no special 2013 event to honor Dr. Martin Luther King, Jr., I wrote a letter to the local paper. The letter incorporated two quotations (shown here in italics) from Dr. King  but, when published, only one was attributed to him. So here at least, is the document as it should have appeared.

We must rapidly begin the shift from a thing-oriented society to a person–oriented society. When machines, computers, profit motives and property rights, are considered more important than people, the giant triplets of racism, extreme materialism, and militarism are incapable of being conquered. (Dr. Martin Luther King, Jr.)

For 23 years, the wisdom and courage of Dr. Martin Luther King Jr. has been celebrated in Loveland. For 23 years, a small corps of volunteers has, with cooperation from the school district, created ever-grander events. Held at Thompson Valley High School, recent celebrations included speakers and performers, prizes for elementary and middle school essay and art contest winners, non-profit information booths, and refreshments.

But no one came forward in 2012 and this year there will be no community celebration of Dr. King. Have we learned all we need to learn from the life and words of this man? Has he become only an excuse for a day off from school and work?

I refuse to accept the view that mankind is so tragically bound to the starless midnight of racism and war that the bright daybreak of peace and brotherhood can never become a reality. (Dr. Martin Luther King, Jr.)

And I refuse to accept that Loveland will never again celebrate this man.
Posted by Mim Neal at 4:40 PM No comments:

My friend Jenn calls it the ‘Kilroy complex’ – the tendency of some cats to favor hanging their heads down over things – a shoulder, the edge of a bed, whatever.

Not all cats have it -- my cat Guinness does, my other cat Herbie does not.

It’s cute and a little mysterious. I can’t imagine why hanging one’s head down over something would feel good. But it must.

Kilroy has an interesting heritage – originating, perhaps, with Australian soldiers in World War I then adapted/adopted by American soldiers and/or factory workers during World War II. One of the meanings was to indicate a safe territory – someplace where American forces had secured a sanctuary. Or it could mean that someone in some munitions factory or shipyard had marked a weapon or battleship with his (or her) signature, guaranteeing that it was well made.

For Guinness, it’s just a thing that he does. Often when I’m at the computer, he will walk in front of the keyboard then onto my shoulder, draping himself in classic Kilroy style – and purring. This action stops all compositional progress of course but, really, who cares? It feels like a sincere form of feline affection, an endorsement: this is safe territory and our bond is well made.

Hallelujah.
Posted by Mim Neal at 4:31 PM No comments: