The first time I heard it, I was addicted. Now, every year, I try very hard to drive up into Rocky Mountain National Park in time to hear it again. 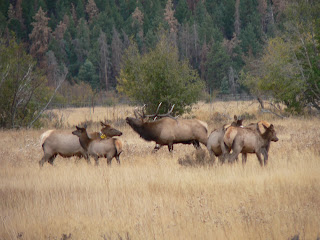 The bull elk in this snapshot is 'bugling' -- the sound akin to what I imagine a donkey would make if someone poked him unexpectedly. Except that instead of hee-haw, the elk makes a long heeee that rises another octave to finish. It's not a pretty sound. But it pierces my civilized heart with primal awe.
Interestingly, the annual rutting season is the only time that male elks are boss. The rest of the time, herds are matriarchal. But for a few weeks, mostly in September, bulls gather and service harems of females using their distinctive bellow to warn off competitors and corral their true loves. Younger males, unable to triumph, watch and learn. Their turn will come, as Cubs' fans say -- maybe next year.
The great annual drama plays out before your very eyes. And the sound echoes through gold-beige meadows and bounces off autumnal glory. 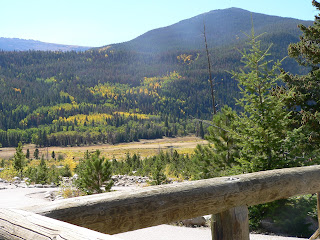