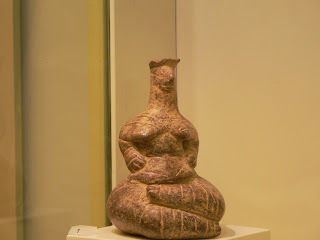 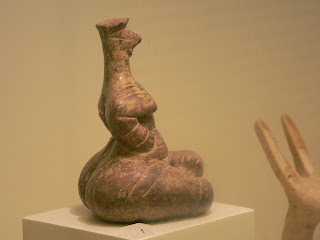 Here she is. A terracotta Neolithic Snake Goddess from circa 4,500 BCE. She's just under six inches high and protected in a glass case at the Heraklion Archaeological Museum in Crete.

To me, she is a symbol of the millennia during which women were honored and society was more egalitarian and peaceful.

For more than 1,500 years, Crete thrived without invasion, evolving from a Neolithic society to a Bronze Age civilization (the Minoan) that managed to retain its belief in the unity of life -- and the sacredness of this planet.

It inherited the Neolithic culture of Old Europe which established these patterns as early as 7000 BCE.

I met the Snake Goddess on the first full day of the Goddess Tour of Crete led by Dr. Carol Christ (www.goddessariadne.org). She, amid all the treasures in the museum, was the item that bowled me over.

Later, in one of the shops across the highway from the ruins of the Knossis Palace (or sacred center) I bought a reproduction. I carried her around to all the sacred places we visited. Often, we would have ceremonies during which we honored our individual goddesses with libations.  I poured honey over mine so she is, even after several washings, a bit sticky.

Nonetheless, I honor her. I found a spot on the east side of my house where she now sits under a glass tree sculpture next to my twig from the sacred myrtle tree at the Paliani Convent.

I still have not absorbed her import.  Intellectually, I know that human civilization moved on. After more than 5,000 years of matrilineal communities, we took another 3,000  years to develop great literature and perpetual war on each other and the Earth.

As I sift through my memories and emotions, she remains -- serene and silent in my living room. Waiting, I think, for me to figure it out.

Or perhaps for all of us to figure it out.
Posted by Mim Neal at 6:00 PM